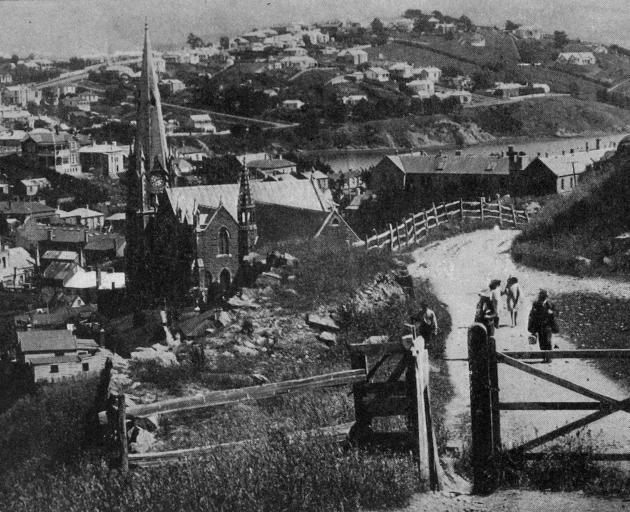 The Quarry Road, Port Chalmers. - Otago Witness, 6.8.1919
The votes of thanks proposed by both Houses of Parliament to the forces included thanks to the gallant troops of the dominions, India, and the colonies for the promptitude of their response to the call of Justice and Freedom, and the noble part they played with their British comrades in securing the triumph of Right over Wrong.

Lord Curzon made a deep impression in the House of Lords when paying a glowing tribute to the dominions' efforts in the war.

It was not the first time, he said, that the dominions in recent history had come to our aid. Canada, New Zealand, and Australia had aided in South Africa, but never before had they been converted into great armed camps, enforced in some cases by compulsory service, treating the struggle as though it were their own.

The deeds of the dominions in France and Gallipoli were already a national epic, enshrined in the glories of our race. Four hundred and sixty thousand soldiers came from Canada, 400,000 from Australia, 112,000 from New Zealand, and 76,000 from South Africa.

This million men had exerted a force that it was impossible to over-estimate, and had left an imperishable impression on the conscience of the world.

NZ not alone in coal shortage

New Zealand is far from being conspicuous as a country confronted with a coal shortage. The shortage may be said to be world-wide, and as the purposes to which coal is applied are indispensable to the life of nations, the deficiency must be made up somehow.

Naturally attention is being actively directed to the provision of a substitute. The scarcity of coal may be expected to give a great impetus to the development of hydro-electric schemes.

It can scarcely be too often emphasised that the dominion is specially favoured in the possession of hydro-electric potentialities in relation to which its people have an opportunity to show foresight and enterprise. The reasons why this opportunity should not be neglected in Otago at the present time have been convincingly expounded.

The outcome so far is seen in the formulation of a local scheme for the production of electrical energy for utilisation throughout the provincial district. This scheme is rendered the more desirable and necessary by the fact that the Government is committed to the development of hydro-electric power in the North Island before any fresh scheme is undertaken by it in the South Island. Otago simply cannot afford to wait indefinitely for the local inauguration of a State scheme.

No action on beach erosion

Sir,- A few weeks ago you drew the attention of the public to the state of the beach between St. Clair and St. Kilda. In the meantime the authorities in charge have done nothing, but thousands of tons of sand have disappeared, and the beach is an eyesore, as it is strewn with lupins and marram grass, showing that the sandhills are fast disappearing.

There is no doubt that some parts of our suburbs will be in a very bad state if the sandhills disappear as quickly during the next six months as they have done during the last six weeks.- I am, etc., E. L. Macassey.