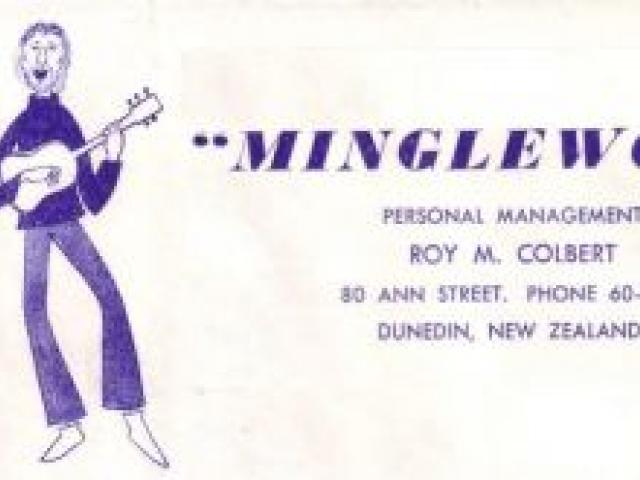 My old friend Peter popped around for a cup of tea last week. It's something we've been doing occasionally since he came back home from Auckland a couple of years ago.

Peter is my sole connection to two pitiful morsels of musical involvement spread over nearly 50 years - writing about music doesn't count: on the merit totem pole, the worst musician may be at the bottom, but the best music critic is three metres down below, underground - and for that, I really should be serving Peter tea every day.

The main three kinds of musical involvement I should have managed, given my love for music and the fact I ran a record store for 35 years, were being in a band, sponsoring live performance, or starting a record label. But I did none of these. I vastly preferred being inert.

But back around 1970, my friend Peter had a folk-pop group called Minglewood, and against all rational logic, he asked me to be their manager. I was astonished. The requisite managerial tools - deal-making, pushiness and rat cunning - were completely foreign to my benign nature. I took the job.

Minglewood were four, two male, two female, a kind of Peter, Paul, Mary and Mary. They had a record deal with White Cloud, which would later release the first Split Enz records.

Within minutes of my becoming manager, the two women, one of whom later became a high school principal, rode off into the sunset. Peter told me my first jobs, which had to be done immediately, were to extricate the band from White Cloud and find two more female voices. A huge ask.

I had read of Andrew Loog Oldham getting the Rolling Stones away from Decca, so my extremely industry-savvy letter to White Cloud, with ever-so-thinly-veiled references to a legal team waiting behind rocks to pounce if things didn't go our way, proved surprisingly successful, though possibly at that stage they preferred Split Enz to half a band from Dunedin.

And I quickly found a singer, the girl next door. I'd heard her singing along to the hits on her sister's record player; she could definitely do the business. No experience at all, but oodles of pluck. The other half of Minglewood welcomed her in, and we were away.

We struck first at Joe Brown's National Search For Stars, the American Idol of its day, and after a thousand heats and semifinals, Minglewood performed before a large Dunedin Town Hall finals crowd.

Unfortunately we came up against a local boy who sang the songs of Heintje, the German boy soprano, whose records were selling by the million. But Minglewood went close, alongside Noel Parlane, the singing milkman, who later made a raft of country albums.

Minglewood then recorded a Paul Simon song for the Joe Brown label (the B side, Buffy St Marie's Guess Who I Saw In Paris was better) but it never came out. They supported Julie Felix, and toured Fiji billed as New Zealand's Top Band. None of this was down to me, but for 18 months, I was a band manager. One sheet of letterhead paper still remains.

My other legitimate musical involvement came one Saturday night when Minglewood were playing an Invercargill cafe. I was at the back of the room, being inert, when Peter broke a string.

Deluded by the grandeur of playing in an Invercargill cafe, he held his instrument aloft as if he had a guitar tech. I presumed he meant me, so I bounded onstage, quickly whanged on a string, something I had never done in my life, and handed the guitar back. The string snapped like a rifle shot on the first chord.

So that's it, my tangible involvement in the music game. Band manager and guitar technician. One trip to Wellington, no money, no fame, no respect. Peter never brings it up. It's just something we know not to talk about.