Buying your own gifts: stupid is as stupid does (times 10) 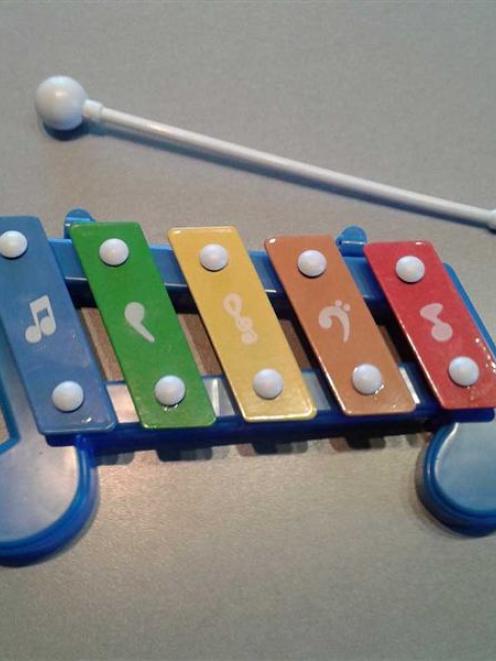 A tink-tonk xylophone. Photo by Roy Colbert.
The disadvantage in buying your own birthday presents is that if they are wrong, you look 10 times stupider than you look when buying incorrectly for someone else. You are, after all, meant to know yourself pretty well.

The recent birthday saw two crushing examples of this, glue and socks. For years I railed against people giving me socks as a present. I was young and free then, a wild and exciting human, often seen in bare feet, a man, it seemed, not long from the beauty of the jungle. Women clung to me like Boston ivy.

But now I am old and feeble.

Young people shout into my ear trumpet asking what I want for my birthday, and I wheeze only one word, warmth. So for this year's birthday, I bought six pairs of socks.

''Why did you buy six pairs of women's socks coloured purple and blue?'' asked my wife on the birthday morning as I feverishly ripped the wrapping paper off, almost as if I didn't know what was inside.

Well, the answer to that was cloudy. I didn't know they were women's socks (what is the difference?) and also I thought all six were black.

My eyes have never been a lethal weapon in dimly lit two dollar stores.

''Because, sweetie, I prefer women's socks,'' I retorted tartly.

''And don't you think it's time I bought some colour other than black?''

As for the glue, same shop, they were sticks, like honey-coloured cigarillos.

Seemed like a lot of glue for two dollars, but this purchase appeared to be saving the family valuable money for key groceries.

''These are for a glue gun,'' said my wife wearily.

I sighed a patronising sigh.

''Wife, why do you speak constantly with a forked tongue?'' I asked rhetorically.

There was no comeback for her there.

I did get some fine presents this year. Six authentic beer glasses from the now-deceased Captain Cook.

I bought alcohol illegally from this tavern of sloping floors and sin in the '60s, and pretty much lived there in the early '70s. I have probably drunk 80 times from all six of these glasses that now sit as thick and indestructible as railway cups in our glasses cabinet.

The grandchildren performed as spectacularly as they did last year, when they brought two stunning paintings to the table, better than 91% of anything in the Dunedin Public Art Gallery.

Both are now framed and dazzling on the walls of the man cave, framed, I might add, in quality surrounds from The Warehouse, formerly housing photos of Bengal cats. Is there a better domestic pet than a Bengal cat? No, there isn't.

This year it was designer T-shirts.

Jude (4) looked over my life and drew a house with three stick figures and the word LOVE. Picasso tried for this kind of telling simplicity for years and never even came remotely close.

Rowan (7) drew an assemblage, with a slightly expressionist edge, of what he sees as my life, the things that make my wheels go round: the Sally Army Shop, wittily misspelt as Silly Army, music, cricket, the New Zealand flag, the Ida Valley, the family and a newspaper. Brilliant.

The diabetic that forever lurks within was saluted once again with a pandemic of sugar, including a fantastic parcel from Arizona. Nobody makes lethal candy better than Americans.

And not one but two pavlovas (pavlovae?), one from Wellington, clearly reflecting NZ Post employees' anger at the way they have been treated by the National Government as it arrived as rubble. But gorgeous coconut chewy rubble.

And while I wrote two weeks ago that I sensed the family was banding together to buy me a cheap piano, I was dreaming; no piano. I will have to find one myself, like with the socks and the glue.

But in the meantime, all is not lost creatively - my sister bought me a lovely crystal-clear five-note tink-tonk xylophone. With hammer.