A concession to the quality of Paul Simon's lyrics 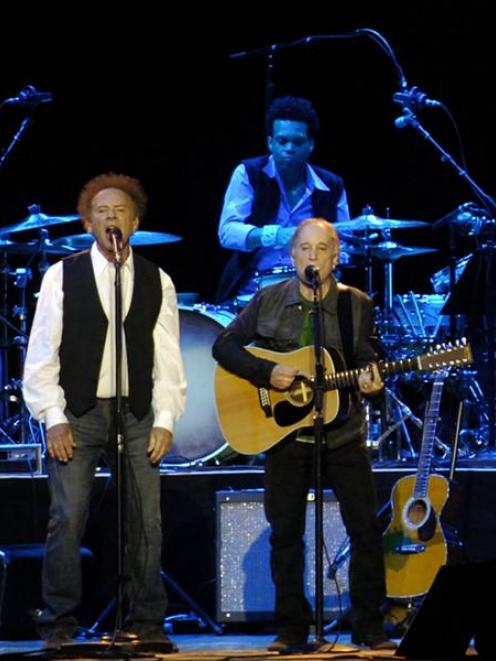 rt Garfunkel and Paul Simon play to a sold out Vector Arena in Auckland in June 2009. Photo by Craig Baxter.
Debris continues to beat my door down from internet auction and retail sites. I am gathering things I barely know anything about, buying on whim and seventh sense.

It must be about having packages in the letter-box, it means I must have friends.

However, one arrived last week which I thought I would probably like, Old Friends, a DVD of Simon and Garfunkel back together at Madison Square Garden in 2003.

I like Simon and Garfunkel an awful lot, but I did hold a position in the '60s when I had to defend Bob Dylan against Paul Simon. Some people maintained Paul Simon was the better songwriter. But he only writes four songs a year, I would wail, often brilliant, OK, but only four. Dylan writes four songs a day.

And in pop music, which it was then, quantity was all. Only painters (Vermeer) and poets (Larkin) were allowed to shag around.

Besides, could there ever have been two more pitifully pretentious people than Simon and Garfunkel?

Garfunkel should have been imprisoned for his sleeve notes on the back of their first album, Wednesday Morning 3am. While Simon, in The Dangling Conversation, wrote -

"And you read your Emily Dickinson, and I my Robert Frost, and we note our place with bookmarkers, that measure what we've lost ... Can analysis be worthwhile, is the theatre really dead?"

Good grief. Dylan may well have written some of the most meaningless elephant babble of all time in those '60s long songs, you know, the ones with titles like Stuck Inside Desolation Visions Of Approximately Eden Again; OK, I exaggerate, but I'll take elephant babble over literary simper any day of the week.

And Garfunkel looked like such a prat. Still does.

Dangerous electricity has clearly passed through his hair, and while I am sure he has been told it is not a good look, he has persisted with it. Because he is a prat. And always with the vest! Nobody cool wears a vest.

Then there are those precious things he does with his hands like he is polishing gossamer. Please Artie, just sing, you have a beautiful voice.

Paul Simon looked cool for a while.

When he had his hair. He made some terrible hirsutan mistakes in the '70s, but so did most of the All Blacks. And he was very small, as opposed to Garfunkel, who was quite tall.

They always looked like the two weirdest kids in class who became friends purely as a defensive measure against bullies. They never ever looked like a proper duo, like the Everly Brothers.

Bob was fond of letting you know he knew everyone in the game: you visited him at his (rented) Remuera home and every time the phone rang he would say it was Carlos Santana, Ravi Shankar or Henry Kissinger.

"Paul was trying to tell me he was breaking up with Garfunkel," said Bob.

"I was the first person in the world to know."

Phew. Imagine me knowing the person who was the first to be told Simon and Garfunkel were splitting up. But of course they did split up.

Old Friends is a record of one of their reunions, beautifully begun with that title song, and filled with amazing versions of things like America, which, and I say this behind cupped hands trying to throw my voice into someone else's mouth, is probably better than anything Bob Dylan ever wrote.

It's not about quantity really.