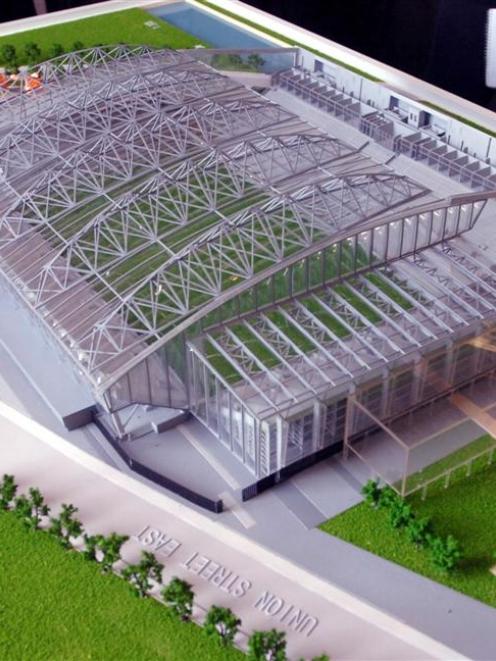 Model of the proposed Awatea St stadium. Photo by Peter McIntosh.
A fully roofed large public stadium, able to cater for a range of entertainment and sporting events, has been so long a desirable entity for Dunedin that the case for one is unarguable.

That the wish has never become a realisable prospect until the 21st century suggests a considerable complacency and inertia attends our civic desires.

Complacency, and indeed inertia, have connotations of the negativity that has dominated the debate about the Awatea St proposal.

Hindsight, as we all know, is a wonderful thing. But what is needed now, as the Dunedin City Council moves towards finality on the matter, is not hindsight but foresight.

Much has been made by both sides of the result of the last local body elections. Stadium proponents claim the outcome showed the majority of voting citizens favoured candidates who backed the project.

Stadium opponents claim it has so changed that a new referendum is required, and confidently predict a negative result were that to happen. But what, exactly, is the relationship between an elected council and its citizens? It is a bargain, struck by consent, involving the core question of risk.

We invite the people we elect to take risks on our behalf to secure the continuing management of the communal facilities of the city, improve and modernise services where the need exists, and advance the city's progress, without which we would all still be using horses and carts and reading by candlelight.

And the measure of that risk is the level of annual cost we all share and which each of us is communally obliged to make (notwithstanding the futility of a "rates boycott").

Those whom we most recently elected to the city council (and we include in the bargain the Otago Regional Council) are proposing a degree of risk across many projects in the next 10 or 20 years which is with good reason scaring quite a few ratepayers and potential ratepayers.

In this regard, prudent consideration may be given of last August's Standard and Poor's risk outlook for the city council of "AA- long-term" and "A-1+ short-term", described as "stable", and which included the proposed stadium, and other projects in the council's long-term plans.

These ratings, we were assured, reflected well on the council's "strong management" and its record of fiscal discipline. They included the expectation that council debt would continue to increase in the short-to-medium term, rather than peak and then decline. The expectation was that the council would maintain its "strong" financial position.

This report card implied the "risk" bargain is not the great gamble some quarters are suggesting. But the assessment was necessarily narrow, taking little or no account of the ability over 20 years of ratepayers to meet not just their share of the stadium's capital impost, but the full range of other planned projects.

In good times, with full employment, all should be manageable, but the boom years are over for the time being and the recession, with unemployment predicted to reach 10%, is with us; coping with it must perforce be every householder's priority and every business owner's worry.

It becomes part of the risk bargain, therefore, to consider whether the council and the ORC are - like so many households and businesses today - over-committed; whether the councils' acceptance of risk is too far out of kilter with their owners'.

We have already remarked on the redundant extravaganza of the planned new headquarters for the ORC. If there was a single reason for the forced amalgamation into one entity of local government in Otago, then this is surely it. Many see the stadium in the same light, and as we have said, it is desirable though certainly unnecessary.

The argument that Carisbrook must be replaced in time for the Rugby World Cup is clearly baseless, since the matches have been allocated to Dunedin regardless and the council will not - and should not - fund on the scale required a single user facility.

Not much more than half the target for private sector funding for the stadium has been raised, and much of that subject to renewable contract. It is perhaps a measure of the times and a failure of confidence that this sector seems chary of the project.

Clearly, too, rugby is not going to invest in the stadium: Otago rugby has no money and the national body shows no interest. The stadium trust is confident about the annual operating revenues and costs over the life of the stadium, and claims its confidence is backed by independent scrutiny.

It is manifest that on a day to day basis the chief beneficiary of the stadium will be the University of Otago, its staff and students - and indeed university use is one of the strongest reasons for building it.

It is regrettable that the university's capital contribution is precisely zero, although it will build and own a substantial contiguous facility and the plaza.

Alone, the stadium represents a relatively low level of risk for ratepayers and a handsome return in terms of city facilities. Its construction will provide considerable short-term benefits to the city for contractors and labour.

To deny that its existence will not enhance the city and benefit the region is simply absurd. But this project is not on its own. Both councils have several other very costly irons in the fire and their debt projections have quite pointedly illustrated the quantum of risk to the ratepayers.

It is relevant that, faced with a long shopping list of wants, Queenstown Lakes District Council has delayed several significant projects for fear of escalating debt levels and the ability to pay. There is no good reason why both the city council and the ORC should not do likewise.

In setting spending and debt priorities for the next 10 years or more at a time of a recession of unknown direction or depth, limited civic public works can be demonstrably beneficial but in a city the size of Dunedin - largely ignored in the Government's plans for such a programme - these must be prioritised in terms of need, benefit, and cost to ratepayers.

That is why the ORC's planned headquarters cannot be justified: they do not meet these criteria.

On the other hand, the city could defend proceeding with the stadium on this basis, because of the potential short and long-term economic benefits - particularly the association with the university - but if it chooses to do so, it must minimise the debt load on ratepayers by deferring other projects.