I discover the joy of burning fudge 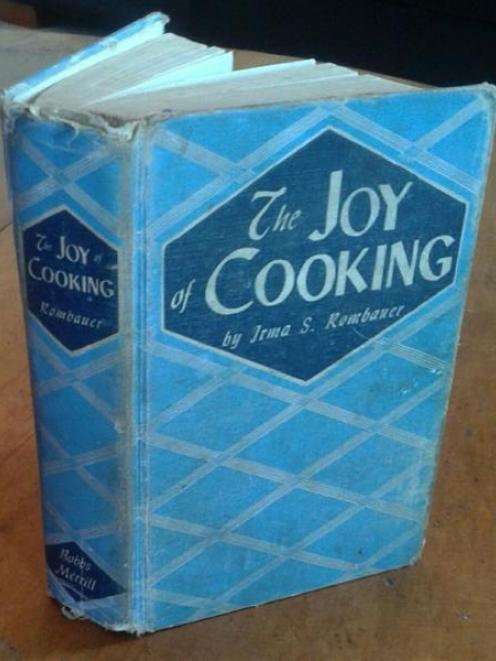 The authentic dog-eared 64-year-old copy of The Joy Of Cooking that has lived with Roy Colbert in seven houses. Photo by Roy Colbert.
If there is one truism that is truer than the truest of all that is true, it is if you are looking for something, you will find something else.

Leonardo da Vinci or Galileo probably worked this out long ago, but whoever invented this fiendish version of Murphy's Law does not interest me a whit.

I just kind of wish it wasn't true.

Last week, the something I was looking for was The Convenient Marriage, by Georgette Heyer, which I was sure lived in one of the house's many bookcases.

Let us not for a second dwell on the fact I was searching for a book by the grande dame of historical romance, as if that is a lesser intellectual thing, let us just say the book's spine shone from its shelf for years like a forest fire.

But The Convenient Marriage has gone; Murphy herself may even have entered the house in the night and stolen it for reasons only Murphy knows.

Instead I found The Joy Of Cooking, by Irma. S. Rombauer.

My mother was not a good cook.

Those in the cuisine industry with their own language and oblique phrases would have had a name for my mother as she moved around the kitchen, hesitant and confused; they would have called her A Bad Cook.

But as in defiance of the DNA she was passing on, my mother chose, when I was about 10, old enough not to burn the kitchen to the ground, to allot Sunday afternoons to me, the gas range and the oven.

And Irma's cooking book, my mother's staple, brought back from San Francisco in 1950, a gift from Aunty Jane, exactly as many pages as The Luminaries.

My mother, oblivious to my Cancer The Crab astrological destiny of Michelin chefdom, said it was important I learned how to cook.

It would make me attractive to a partner later in life, like playing the piano and tennis.

Before too long, I had mastered three meals, though I use the word meal in a liberal sense.

Right from the start I thought only of sweets, cakes and desserts. I had no wish to ever cook a main.

I didn't like meat, and a quick flick through Irma's complicated instructions confirmed that such meals would be beyond a 10-year-old boy with the practical intelligence of a pipe cleaner.

The first delicacy I decided on was salted peanuts.

I was already addicted to peanut butter, so the peanuts would give me something to nibble on before it was time for more peanut butter.

This would surely be easy, I thought, just sling some peanuts in a pot of boiling water, wait for a while until they got dark, then sprinkle on some salt.

Irma had other ideas.

Cripes, I hated that oven.

The oven was the work of Satan. Every time I was ordered to take things out of it, I would blister my fingers to the bone.

It was years before I learned of oven cloths.

This was an era when people thought an artery was where you bought paintings.

So I whanged on the massive amount of butter she suggested, waited until Satan's oven had turned the peanuts brown, got my mother to pull the oval glass dish out, and poured far too much salt over the greasy peanuts.

I tried to make chocolate fudge because I liked it so much, but this one required cooking skills I don't even have to this day, like patience, timing and common sense.

Irma said 238 degrees, I wanted my fudge made quickly, I never went under 300.

I nevertheless claimed this as a meal, Fudge Croutons, best melted before eating.

A primary school friend, not Irma, taught me my third masterpiece - caramel.

You just put a tin of sweetened condensed milk in boiling water for quite a while, open the can with a can opener ,and there you have it: the insides of 300 Moro bars.

Though Irma would have added butter.