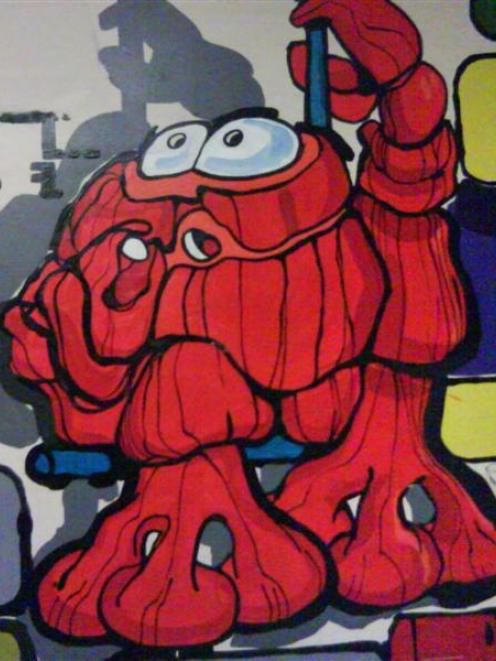 A John Noakes mural at Dunedin Hospital. Photo by ODT.
Minutes from a recent Otago District Health Board meeting have been furtively leaked my way, on the promise I keep all details under my hat. Such discretion goes without saying. Tight-lipped silence is my bond.

It seems they are considering erecting a plaque in the hospital foyer commemorating the astonishing raft of diseases, injuries and biochemical disorders I have suffered over the past 50 years.

''I'll warrant this chap has undergone everything we can treat,'' opined one of the professors, a man specialising in river conservation.

The professor, sadly, speaks with forked tongue. While I am naturally appreciative of being so honoured, I must confess that while every major organ in my body has long gone, or at least been transplanted, I have never had my tonsils out, or, as they call such a thing, a tonsillectomy.

In younger years, during the interminable form-filling and question-answering that goes with a pre-op, I would hear this word as pencilloctomy, the result of rock music battering my ears into inverted dyslexia the night before.

I had swallowed many pencils at primary school - heavens to Betsy, hadn't we all? - so my answer to the pencilloctomy question was invariably, no, but I daresay I am on the waiting list.

Most people my age seem to have had their tonsils out. It was like having your teeth removed when you got married. But not me.

I have lived tonsils intact, my pharynx clogged with slowly atrophying pencils (they made them strong in the '60s), weakened only by an inability to reach notes above the piano's bottom octave during sing-alongs at prestigious dinner parties. Next to my sub-baritonous drone, Leonard Cohen is a yelping castrato.

Our daughter had her tonsils removed at the age of 11. When we took her up to Wakari Hospital, she was the happiest child ever to enter their doors. What fun this will be, we said.

But when we saw her after the operation, she was a droop-drenched match-child, her voice a tiny whisper at the other end of a long tunnel.

''Will she now ever sing Somewhere Over The Rainbow in The Wizard Of Oz?'' I wailed to my wife.

We plunged our faces into the bed and sobbed like the babies we were until a nurse hissing through gritted lipstick said we were upsetting the other patients and we should act like grown-ups. But no parent with a child in hospital for the first time is a grown-up.

A close 9-year-old friend whom I have occasionally made giggle and squeak with funny stories had her tonsils out last Thursday. Oh, how times have changed.

I scanned the nursing staff with the practised eye only a working investigative journalist can muster - not a single sign of gritted lipstick. Budget restraints have clearly kicked in with venom as the shoe.

I went to visit when the anaesthetic was still eking away, a medical status they call fuzzy-brained, and decided a funny story to speed up recovery was unwise. Swallowing pencils, in fact, would have been easier.

Instead, I told her of my 7-year-old grandson, who has now taken over much of my domestic healthcare, from pricking my finger and testing for blood sugar on the little machine that to him looks like an iPod, to setting up the pen syringe, dialling in the insulin and then whanging the whole pot of potatoes into my stomach with a battle cry he normally reserves for fighting with his 4-year-old brother.

''He will most certainly become a doctor,'' I said to my wide-eyed 9-year-old, now completely forgetting her sore throat and hallucinogenic disorientation, a medical status they call diversion.

Recent Australian research indicates if you don't get your tonsils out you will not grow tall and do worse at school. I did worse at school and am no bigger than a bidet. It is probably too late now for a growth spurt, but I will make inquiries. I do like ice-cream and jelly.