No modern craze can beat reading in a puddle of light 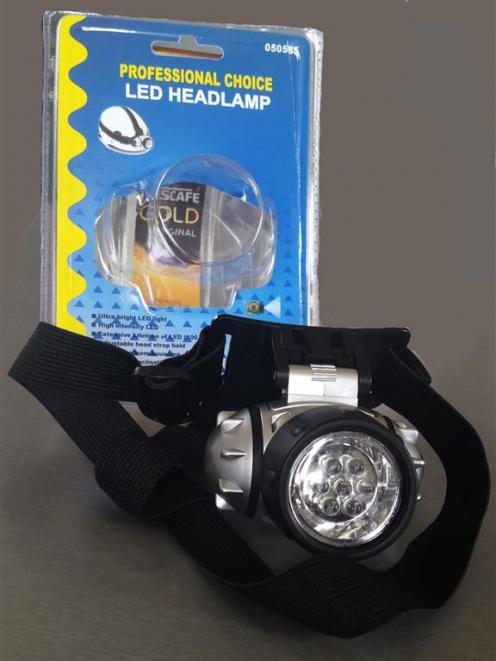 A new headlamp. Photo by Roy Colbert.
What an enormous huffing and puffing of glee there was at the start of this year when it was announced books were holding their own against the abomination of Kindle culture.

One News raced into local bookshops to verify overseas figures, and yes, according to bookshop managers, books had been going out the door by the truckload.

Video proof was displayed, punters lying on the floor to try to get to as many spines as they could.

Near the end of the item, one of the bookshop people admitted adult colouring books were a major item in Christmas sales.

As indeed they currently are all over the world - Amazon in fact announced that five of its top 10 best-sellers for 2015 were adult colouring books.

These books, invented by William the Conqueror in 1066, are currently a fad.

I love them to death.

But I love my Kindle too.

In a house bulging at every seam with The Latest Gadget, so many of them hardly used, I treasure the Kindle as one of my wisest and most-used things.

In Christchurch for the week after Christmas I read three books and started a fourth, all on a Kindle.

One of those books was just under 1000 pages long, I think.

You can't tell on a Kindle, but I read somewhere that was what it was.

I would never have taken these four print books to Christchurch for two reasons; one, the car and the two trailers we pulled behind us were so full of presents for the two grandchildren there wasn't room, and two, in the twilight of my life, my tiny arms are little more than matchsticks from the matchstick factory in China, those matchsticks returned for refurbishment because they were too thin.

The Kindle can handle 1200 books and I am already a sixth of the way towards capacity.

But my Kindle is not quite perfect.

It is an earlier model, and it doesn't have that wonderful back-lighting the latest ones do, a feature that allows you to read at night in darkness, hence not ripping your partner out of a scrummy dream about ponies and making him or her extraordinarily grouchy and damagingly quick-tempered the next day.

Of course, a gadget-crazy fellow such as I would normally solve this by simply buying the latest model.

It probably makes tea and toast the next morning as well.

My goodness, modern technological things just blow you away, don't they?

But my New Year's resolution two weeks ago was to cease fiscally frivolous fad following, hence I resolved to respect the poor, and spend only on charitable objects which will make the world a better place.

So, for $4.90, I bought a Professional Choice LED Headlamp.

The three triple A batteries weren't supplied, but the cardboard packaging psychobabble claimed the bulb would last 100,000 hours of searing bright light.

The mathematicians among you will have already computed that as being less than five-thousandths of a cent an hour.

This is value for money, Jimmy.

I think in The Gadget World they call this hedging your bets, like spreading your wealth around a number of banks and safe gambling black holes like Bonus Bonds.

The first one didn't work.

The words on the cardboard, Do Not Force, were germane.

That always means the device is highly unlikely to function, and it will be the forcer's fault.

Touching two things together is forcing.

The second one did work, ironic really as it was made by the same factory ("China'').

You'd think this factory would compare product before sending to New Zealand.

But, hey, it was Christmas, and the gadget world is filled with anomalies.

I can read in the lounge now, where the light has always been dim to make movies more intimate, and while I look like a nong, the best results always come from sacrifice.

Much better value than a colouring book.