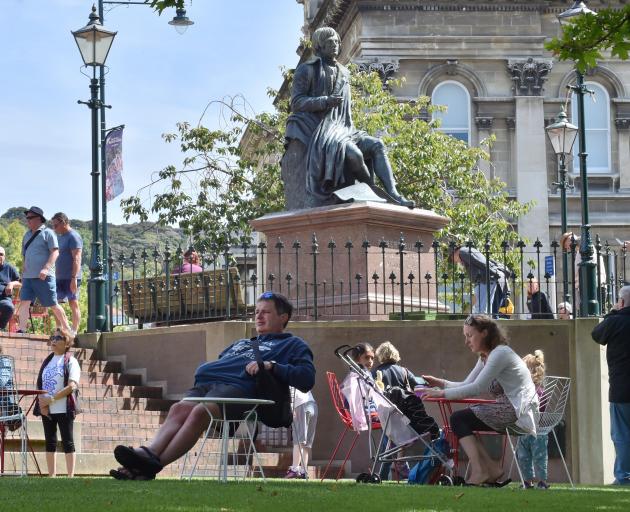 People enjoy a warm day at the Octagon earlier this year. Photo: ODT files
Oh Dunedin, we love you but sometimes you make it difficult for us.

There is an unwritten rule — in my head, anyway — that I will only entertain locals complaining about our weather.

When people from outside Otago complain about our cool climate, my hackles rise, so I had enormous sympathy for White Fern Suzie Bates, who had to avoid her team-mates and their jokes during the washed-out cricket international last week.

As I watched waves of drizzle rolling over the University Oval it was hard not to feel immense sympathy for those who have had to organise outdoor events this Dunedin summer.

During the February Masters Games, it rained more than even a Dunedinite would believe was respectable, and of course it had to be the year in which the organisers decided to move the Masters village to an outside area — the Octagon.

My hockey team-mates and I valiantly danced to bands on freezing nights — have I told you we were the mighty winners of the over-45 gold medal? Olympic-style celebrations followed as we went to party in the Octagon.

Unfortunately, very few were brave enough to join us to admire our metal-wear, apart from the softballers — drizzle and cold would never hold them back from a party! Gold medals aside, I enjoyed my traffic-free Octagon experience, although it hasn’t been such an enjoyable experience for the ‘‘grumpy’’ retailers.

Where do you sit on the debate around traffic closure in the Octagon? I have to admit, I have been sitting on the fence for a while, but as they say, those who sit on fences get sore bottoms, so I have weighed up the pros and cons and formed my opinion.

One of the great things about Dunedin is that we have retained our central city retail, complete with locally-owned boutique shopping experiences.

Visitors to our city comment on our boutique fashion and interesting shops, something we locals take for granted.

Running an independent retail business is not for the faint-hearted. Like many businesses, retail can be seasonal, which means you literally have to bank the good months in order to get through the down-season.

Increasingly for Dunedin retailers, visiting tourists and cruise ships mean the months of January, February and March have become critical to their whole year’s success. Drops of revenue of 50%, as quoted by some retailers during the ‘‘Octagon trial’’, will impact their whole financial year.

I have heard it suggested that if retailers are finding it tough, maybe they should move out of the Octagon. Unfortunately, as those in business know, such decisions are never so simple; many will be signed up to multi-year rental leases and given the confusion around the trial and what it means for the future, it would be hard to find a willing business to enter a sub-lease arrangement.

I would be heartbroken to see business closures because of revenue decreases this summer, but this may be the reality for some who are faced with declining income and fixed expenses.

It’s hard to understand this volatility when you are on a salary which comes into your account every week regardless of your performance. Those in small business though understand it too well — in the words of my chairman, ‘‘Anna, cashflow is more important than your mother’’. (Sorry, Mum.)

To the council, I admire what you are trying to achieve, we love our city and we love it when we have a bright, sunny day and that indescribable ‘‘Dunedin vibe.’’

I understand the sentiments that are behind wanting to enhance that vibe and to create a city less dependent on vehicle travel. Our reality though is that we have a much smaller population than many cities who have successfully achieved such pedestrian areas and although it pains me to say it, our climate is simply not conducive to multiple outdoor events throughout the year.

Finally, in memory of my father’s lifelong career working to support the health of the elderly in Otago, it would be remiss of me not to acknowledge our need to support everyone that lives in this city.

We do have a high proportion of elderly citizens, and I would love Dunedin to be a city which does all that it can to support what they need to access our city centre.

If even one elderly person has failed to leave their home through fear or confusion about the changes, we have failed in our duty of care.

I enjoyed dancing in the Octagon, I love our city and sometimes love our weather — but the party is over. DCC, it’s time to listen to your citizens: quit the trial.

• Anna Campbell is managing director of AbacusBio Ltd, a Dunedin based agri-technology company.

"It’s hard to understand this volatility when you are on a salary which comes into your account every week regardless of your performance. Those in small business though understand it too well [...]"

True, but those in small business should also understand that you are not guaranteed a bus stop (or the equivalent depending on the nature of your work) right outside your business. Uncertainty is part of being in small business.

"If even one elderly person has failed to leave their home through fear or confusion about the changes, we have failed in our duty of care."

Is the author suggesting we should hold up the development of the city even if it inconveniences a single person? If a customer has a problem at Abacus Bio, does the business wind down till that one person is totally satisfied?

Fingers crossed that the party is only just starting.

I am in general agreement with Dr Campbell. As long as we have the Council willing to experiment with the City at ratepayers expense and inconvenience then even the high flyers like Anna Campbell of AbacusBio Ltd, will have to take their valuable time to consider the facts and speak up. Thanks to businesses like hers and the income generating businesses which operate in the Octagon, the City will receive enough in rates to provide some useful services to all the commercial enterprises in Dunedin to help and not inconvenience them or cause them to suffer needless financial loss.

Calling out around the world
Are you ready for a brand new beat?
Summer's here and the time is right
For dancing in the street

The only light I can see from this experiment is that most people now accept that when traffic and parking are removed from an area then many businesses will see a drop in trade. Some people will ignore those impediments and walk whatever distance is needed so they can shop where they want. But most won't.

The bit that seems to be missing here is any understanding that the drop in business for the Octigan area will be magnified with the George St recreation / destruction. DCC seem to be hell bent on building an inner city precinct that reflects much larger and flatter cities with a different population mix than Dunedin has. I for one will be very disappointed if George St and Stuart St become the retail void that Princess St is today. But we are at serious risk of that occurring.

About time the 'council' fixed the core services instead of wasting ratepayers money on greenie pipe dreams.