Tall tales and true from the dim past 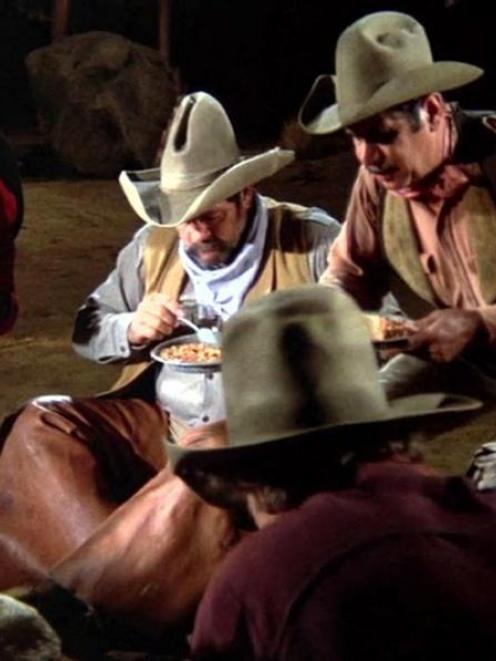 The memorable campfire and beans scene from the film Blazing Saddles. Photo supplied.
We have been told by our elders for years of the power and beauty of storytelling. Oral history. Forget Google, go to the people who were there and make them talk.

Old people. Primary-school pupils today are made to interview and record their grandparents. We need to become a succession of storytellers around life's campfire, eating beans, farting, telling the stories we in turn were told by our own bean-eaters and farters. Nothing beats this.

But are the stories true? I am a voracious reader, but I haven't been near the Bible in a while; my memories of its many stories are dim at best.

I mean, that one about the U2 concert in Damascus with 230,000 punters blistered and dog-hungry in the sun until the equipment trucks came in with seven loaves of ciabatta and some fish - was that really true?

A glut of funerals and memorial services the weekend before last saw me surrounded by old school friends, and once again, it happens every damn time, we found ourselves telling those same old stories.

Big stories, bigger in the telling each time, those at the table listening open-mouthed and incredulous. Bored too, let's be frank.

And us smiling and aw-shucks nonchalant, sure we did that, oh really, you think it was a BAD thing to do? What? You think that is UNLIKELY to be true?

None of us had any time at all for the disbelievers. We had risked our futures, our lives in fact, pulling these deeds off at high school and university. Now is the payoff, now is when we reap the reward for our bravery, our wildness.

James Dean and his fast cars was nothing. And when the children of the future find these stories mercifully captured digitally and stored in an R18 vault at the Hocken Library, they will learn what life was like in the 1960s and '70s, how hard it was, the risks we took pulling off feats that would make the future a better place, feats so stupendous your teeth would fall out in the hearing.

I think placing a gleaming white porcelain toilet bowl on the Otago Boys' High School rector's front doorstep at 3am one Sunday fits seamlessly into this category. It was a tradition.

We would first talk our way into a student party (''we're friends of John'') then fail abjectly to achieve even a one-word reply from anything we said to any girl in the room, or even out in the garden where they were being sick, then get impossibly drunk ourselves and find something to put on the rector's front doorstep.

Road cones, once, a very badly stuffed dolphin, a large tyre, always it was the thought that counted. The toilet bowl was the best, it looked beautiful with shafts of moonlight shimmering off its curves in front of the rector's front door. Did he know it was us?

Quite possibly yes. He did, after all, nearly catch us a few months later when we surprised him by changing our terrorism to the Sunday night and mounting a sustained attack on his house with fireworks. Our original storytelling of that one had him shouting angrily at us from a distance as he came out his back door and looked up on to Littlebourne.

But I note the storytelling now has him tapping us on the shoulder with his rectorial fingers, and us running for our lives. He didn't see who it was because it was so dark. Yeah, right.

We had people in our group who made bombs. Very good dangerous bombs. They could make bombs from anything, spending a lot of time at garden shops way before gardening became a middle-class passion.

There are still unsolved cases on police books of massive explosions above Dunedin, reported excitedly to radio stations, the result of our bomb squad doing amazing things with large balloons, hydrogen, explosives and sodium nitrate-soaked newspaper.

Sarah Polley made an excellent movie in 2012, Stories We Tell, about how people remember things differently. I bet we could make an even better one. If we could afford the beans.