Time to stand and deliver 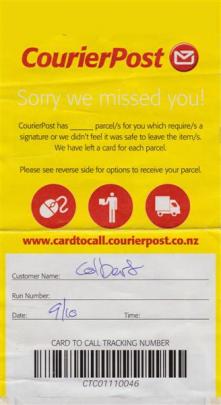 CourierPost's ''Sorry we missed you!'' card. Photo by Roy Colbert.

Why do couriers run?

I have thought about Crucial Things in at least a dozen continents and I don't think a single question has vexed me more than this one.

Had Kim Dotcom not ruined the last election and all the political parties had been allowed to address this civilisation-defining issue, then New Zealand would now be a far better place.

I have heard all the theories, but when the theories have stopped crackling and spitting and returned to a fine dust on the ground, investigative research inevitably takes over.

I have dealt with many couriers over the years, but recently, it has always been CourierPost.

It is administered by NZ Post, which makes hundreds of millions of dollars a year, and apart from closing down branches everywhere, sacking employees in huge bundles, and sorting Dunedin-to-Dunedin mail in Christchurch, it has performed almost impeccably.

The government Careers site tells me an average CourierPost courier earns between $29,000 and $33,000 a year for a 38-hour week.

Those salaries are way different.

It appears contracting is the marked preference, and contractors are paid by the number of calls made.

Hence they run like Texas jackrabbits with wide bulging eyes and a marked uninterest to stop for a single second, even to actually deliver an item.

Putting a Sorry We Missed You card in the letterbox is enough.

This, the apologetic card, happens every time CourierPost comes to our house.

A couple of months ago I was 50m from home when the CourierPost van pulled up.

By the time I was walking up our drive, the courier was hurtling back down to the van, card in hand, delivery undelivered.

The son meanwhile had walked to the front door to answer what must have been the tiniest of knocks.

The courier was astounded to be intercepted.

I could have started shouting but I am not a vengeful man, the courier had waited three seconds, time is money, so I merely said, I can take this, and signed accordingly.

My latest encounter with CourierPost came on October 9, yet another excited purchase from TradeMe.

I waited a few hours and then went to get the mail, where I found the Sorry We Missed You Card.

The doorbell had not rung, and even a feathery tap with a feather would have been heard.

The card pleaded with me to go online where I would find recovery options, but my traditionally preferred one of wanting them to just leave the item by the door was not there.

And there was no phone number to ring on the card.

Yellow Pages, however, came through, and soon I was talking to a woman in Mumbai, after first being informed I could sort out my problem in ''under 10 seconds''.

I had been online for nearly 10 minutes and sorted nothing.

The Mumbai woman was very nice. She told me the courier had called at 9.10.

No, I said, that information - 9/10 - was the date, which the courier had written in the space marked Date.

The courier had left the Time box empty.

I could have been culturally insensitive and told her in New Zealand the slash is used for dates, not time, but that would have been splitting hairs.

I could have wittily asked if the courier had been in a hurry, but how would a woman in Mumbai know that?

I told her I would walk to the depot, crossing six major high-traffic roads with virtually no eyesight.

I wrote most of the above in the online Feedback box, which told me they would ring me within five days.

NZ Post has been driving people livid for some time now.

Soon they will pay a PR muppet half a million dollars to come up with a slogan like We Deliver Your Dreams - remember Inland Revenue's short-lived Our Job Is To Be Fair?

Here's mine, and it's free: Fast But Useless.

[A New Zealand Post spokesman responds: ''We're sorry to hear of Mr Colbert's frustrations. Couriers try to get it right and deliver for customers. They are not paid by the number of calls they make, rather they are paid by piece - so it makes sense for them to deliver items on the first attempt.''

But sometimes customers do not hear the knock at the door and couriers are not permitted to leave a signature-required item at an address if there is no-one home to sign for the item. The receiver can, however, give prior written authority to CourierPost to leave signature-required items at the address if that is the preferred option. We are also working on a number of new services to give receiving customers more options to receive their item at a time or place suitable to them.

''Regarding his call to our customer call centre, it is in New Zealand, not in Mumbai, India. And New Zealand Post does not make ''hundreds of millions of dollars a year''. It operates in the very competitive business areas of banking, logistics and mail.'']