Up to 600 territorial soldiers' jobs to go 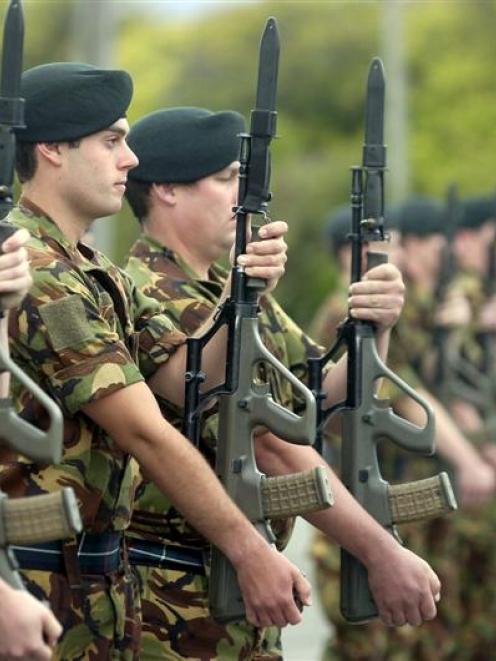 New Zealand's six territorial forces will be merged into three, with the loss of up to 600 territorial soldiers, a briefing paper from the New Zealand Defence Force (NZDF) says.

The briefing to incoming Minister of Defence Jonathon Coleman says the Cabinet agreed in August 2011 to merge the six existing battalion groups into three and cut up to 600 army territorial force positions from the existing 1800 funded positions.

The move would achieve savings of $9.25 million.

A NZDF spokeswoman said the restructure was under review over how the battalions would be merged and where the positions would be cut.

Mr Coleman said no final decisions had been made and it was not known when there would be an announcement.

Honorary Colonel of the 4th Otago Southland Battalion Stuart McLauchlan said he would not want to see the 150-year-old battalion group disbanded and was confident that would not happen.

He had been part of the consultation process and was confident the "4 O'South" identity and presence would remain in the South, even if, as was one of the options discussed, it was as part of a bigger South Island battalion group.

"It is likely 2 Cants [the 2nd Canterbury, Nelson, Marlborough and West Coast Battalion] and 4 O'South will be brought closer together.

"Southland and Otago will keep an identity, but as for what that identity is, is not known yet."

Mr McLauchlan said there was a review of 4 O'South staff before Christmas last year, and paid employee numbers had dropped from "double digits to single digits".

It was part of the "civilianisation" of military staff, he said.

It was not yet known how many army territorial force positions would be cut at 4 O'South as a result of the merger.

"Unfortunately, we have to live within fiscal constraints," he said.

Labour defence spokesman Iain Lees-Galloway was not surprised the territorial force was being reduced in size, as the NZDF struggled to meet its savings target set by the Government.

"This [the savings they have already identified] is nothing like what they need to save. And if they can't find the savings, you have to ask, what else they are going to cut?

"Territorial Forces are a vital component of any force and cutting territorial force numbers reduces your flexibility and options when you deploy overseas."

The 4 O'South unit has bases in Dunedin and Invercargill which recruit and train part-time soldiers and officers from the lower half of the South Island.

It provides trained volunteers for overseas operations as required, as well as a trained pool of personnel to respond to civil emergency tasks within New Zealand. The unit trains regularly throughout the year with three-hour training nights, regular weekend exercises and an annual two-week exercise.

• The Otago Regiment served with distinction in World War 1 at Gallipoli and France, taking particularly heavy losses in the battle of Passchendaele.

• Otago and Southland personnel served mainly with the 20th, 23rd, and 26th Battalions during World War 2 in the Middle East and with the 30th and 37th Battalions of the 3rd New Zealand Expeditionary Force in the Pacific.

• Since 1945, members of the unit have served across the world, including Korea, East Timor, the Solomon Islands, and the Sinai.