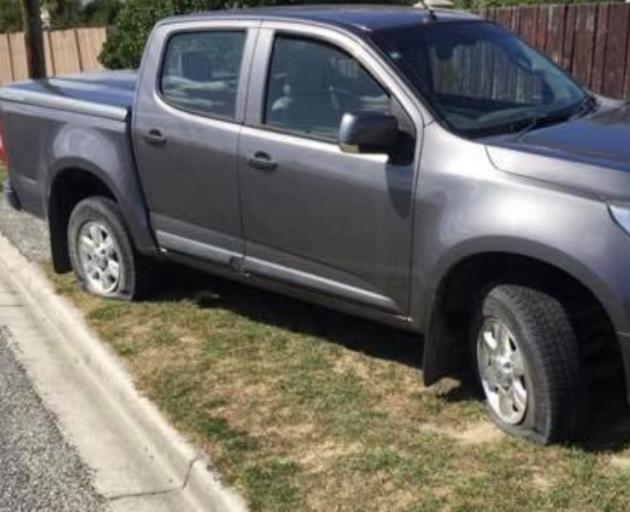 Alexandra man Glen Clark’s ute after its driver’s side tyres were punctured on Tuesday night. PHOTO: SUPPLIED
Alexandra residents are threatening vigilante justice against a youth gang allegedly responsible for puncturing tyres in the town’s centre.

"I woke up in the morning and both driver’s side tyres were flat as."

Mr Clark said he believed he knew who was responsible.

"About a year ago I kicked them out of a party, so maybe this was retaliation."

He described them as "wannabe Mongrel Mob members".

He said it was only a matter of time before they ran into the wrong person.

Social media was rife with speculation as to the identity of the alleged offenders and with threats against those named — something local man Tony Cleveland, whose vehicle had been targeted twice, said was not helpful.

"I don’t want to say too much because it is still under investigation. It’s all over social media."

Acting Sergeant Graham Perkins cautioned against the use of social media and said the three cases were all that had been reported to police although he was aware there could be more.

"It’s been over the last fortnight. I’ve visited three addresses in town. Their MO [modus operandi] is they target tyres on the same side of the vehicle."

He urged people to report incidents to police rather than posting them on social media.

"If we don’t know it is happening, we can’t do anything about it."

Investigations were ongoing but police had identified "persons of interest", he said.

He urged people to park their vehicles off the street if possible.