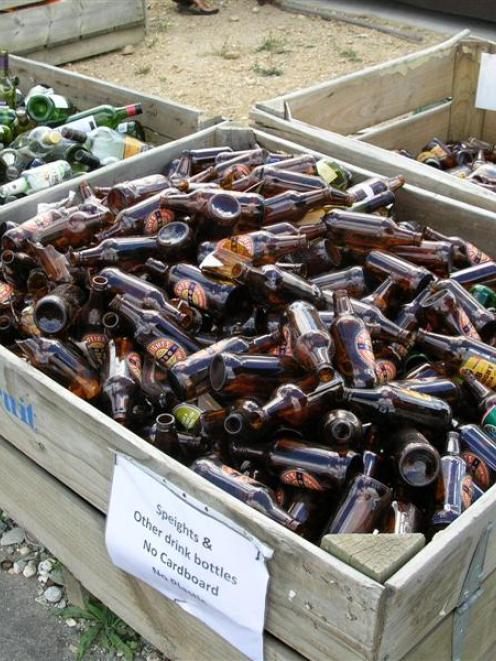 Glass-recycling bins in Alexandra. Photo by <i>ODT</i> files.
Glass recycling facilities for smaller Central Otago towns are on the way, just in time for the holiday rush.

Central Otago District Council waste minimisation officer Sophie Mander said, unlike Alexandra and Cromwell, the towns of Roxburgh, Ranfurly, Omakau, Naseby, Patearoa, Oturehua and Tarras did not have any glass-recycling facilities, even though they had facilities for other recyclables such as paper and plastic.

The towns or townships would each get three large custom-made bins similar in design to fruit crates - one for brown glass, one for green and one for clear - which would be located with their current facilities. Each would hold about 400kg of glass.

Ms Mander and Central Otago WasteBusters manager Brian Fitzgerald said to make the facilities work, the communities would have to indicate when the bins were full and keep the colours separate, as well as keep other materials such as cardboard out.

"It's easy for people to put stubbies in a box but if that box goes into the bin then it contaminates the glass," Ms Mander said.

The Auckland smelter where WasteBusters sends the glass can turn the shipments back if there are contaminants such as cardboard or if the glass is not sorted properly which costs WasteBusters time and money.

It was not known how often the bins would be emptied at this stage as it could only be estimated how much glass would go into them but collection was expected to be frequent in towns such as Naseby which had a huge influx of visitors over the holiday period, she said.

The need for these facilities was identified by the council in 2007, although the communities had been asking for them for longer. They had been made possible through a grant from Central Lakes Trust which enabled WasteBusters to purchase a new truck with a crane capable of lifting the bins.

Ms Mander anticipated the bins would become a permanent fixture in the towns.