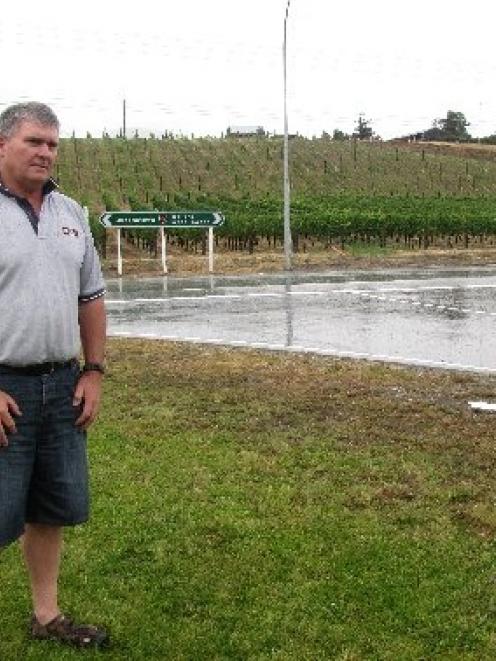 Cromwell Community Board chairman Neil Gillespie yesterday watches traffic at the intersection where a fatal accident occurred the day before. Photo by Sarah Marquet.
Even before the fatal crash at the intersection of State Highways 6 and 8B at Cromwell on Thursday, the New Zealand Transport Agency was in the process of cutting the speed limit from 100kmh to 80kmh.

The crash, between a car and a courier van, claimed the life of the 29-year-old driver, who was of Asian descent, according to police, and one of the female passengers, who died in Dunedin Hospital overnight.

Two other passengers were taken to Dunedin Hospital with serious injuries on Thursday.

New Zealand Transport Agency Central Otago area manager John Jarvis said the intersection was known as having a high crash rate and had been investigated before, but it was a "standard T-intersection . . . with a left turn lane, a right turn bay and good visibility".

"But it's just problematic to some drivers . . . I don't think people are judging the situation properly."

He said, after a crash reduction study a few months ago, a recommendation was made to reduce the 100kmh speed limit to 80kmh for 300m either side of the intersection, as well as at the intersection at the other end of SH8B, with SH6.

Cromwell Community Board chairman Neil Gillespie said the intersection was known in the community as a bad one.

"There have been too many deaths, too many crashes and too many near misses . . . too many people affected by that intersection."

He said the speed limit reduction was a start.

He said there would still be visibility issues when a vehicle travelling straight through the intersection may be, for a time, hidden behind a left turning vehicle.

There are three other T-intersections on SH8B and he said they were all problematic, especially that at Barry Ave, which had "certainly had more than its fair share of incidents".

Several years ago, the speed limit on SH8B had been decreased to 80kmh, which Mr Gillespie said had reduced incidents, but more needed to be done.

Mr Jarvis said one other plan the agency was considering was to create a new left turning lane (coming from the Wanaka direction), further away from where it was now so it was separate from the traffic continuing straight through.

No further details about the crash or the victims were released yesterday.

Senior Constable Phil Beckwith, of Cromwell, said police were working with the Chinese Embassy to contact the victims' families.

Police issued a warning to drivers yesterday after a woman died when a utility crashed into a concrete power pole on a slippery Southland road.

Senior Sergeant Cynthia Fairley, of Winton, said the 57-year-old local woman died when the 2003 utility vehicle she was a passenger in crashed into a power pole at Wilson's Crossing, near Winton, at 10.45am.

The woman died at the scene.

Her name would not be released until her next of kin were advised.

The 58-year-old male driver of the utility was treated at the scene by ambulance officers and taken to Southland Hospital, where he was in a stable condition last night.

Snr Sgt Fairley said with the dry spell in recent weeks there had been no rain to wash away excess fuel on roads, and when it did rain road surfaces became slippery.

"I remind the public to drive to the conditions and take extreme care on the roads during spells of heavy rain."