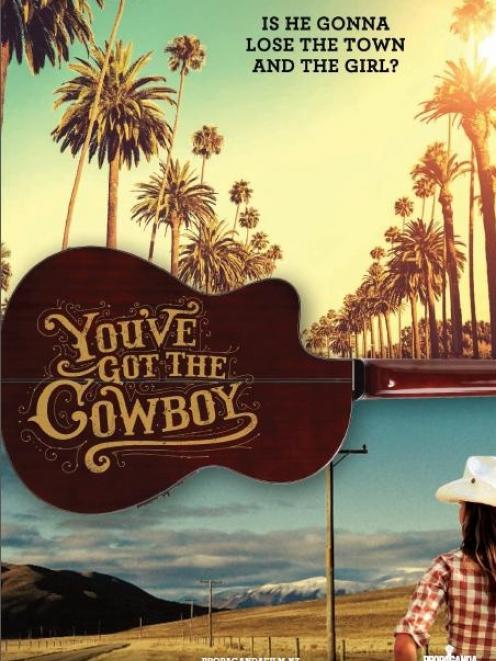 The poster for the movie.
The money from a $6 million to $8 million movie planned for filming in Maniototo will filter through the community and the movie will publicise the region, Central Otago District Council economic development manager Warwick Hawker says.

All going to plan, Maniototo will star in Propaganda Film’s  movie You’ve Got the Cowboy. Mr Hawker said money spent on the project would ‘‘filter through the community’’ through the cast and crew’s expenditure at local accommodation and other businesses.

"And it’s great publicity to have them filming in our region."

Producer Murray Francis was "very positive" the project would proceed and filming was likely to begin in summer. His credits include The World’s Fastest Indian and he started the film company last year. New Zealand billionaire and philanthropist Sir Owen Glenn recently became a partner in Propaganda Film.

Answering questions by email from Cannes,  where he is marketing the film to potential distributors, Mr Francis said he was confident about the film’s wide appeal.

It is described as a "romantic and charming fish-out-of-water story" about a Ranfurly country music radio disc jockey called Cowboy, who travels to the big city to save his drought-stricken home town by trying to convince a country singer to perform a benefit concert there.

"I believe that it will resonate with audiences worldwide."

The budget is between $NZ6 million and $NZ8 million. The latest round of Government incentives for the New Zealand screen industry and also having Sir Owen investing in the film company was great news, Mr Francis said.

"Sir Owen is  ... one of New Zealand’s great philanthropists."

This month, the Government announced a $303.9million boost in film production grants over four years.

You’ve Got the Cowboy will be shot in Ranfurly, the surrounding countryside and Los Angeles and involve a cast and crew of about 120 people.As for who will play the major roles, Mr Francis was hesitant to reveal names at this stage. The economic spin-offs for the area would be immense.

"A film coming into an area like the Maniototo will touch every business. The World’s Fastest Indian touched 129 local businesses."

You’ve Got the Cowboy is based on a story by Dunedin writer Roy Colbert. Funding was also being sought from the Government, the New Zealand Film Commission, pre-sales and private capital.

"From the get-go it’s been exciting working with Murray and his team and feeling their enthusiasm for this project, which obviously focuses on our local radio station.

"I can’t remember any other movie being filmed here which has been all about this place."

Film Otago Southland executive manager and chairman Kevin Jennings said the film industry in the wider district was buoyant at the moment and the film planned for Ranfurly would be "another feather in the cap for this district".

"There’s a lot of moving parts that have to align for a project like this. But there are positive indications, so I look forward to working with them when it all comes together."

"That’s the sort of money we’re looking at. The film industry brings in millions of dollars a year to this region."