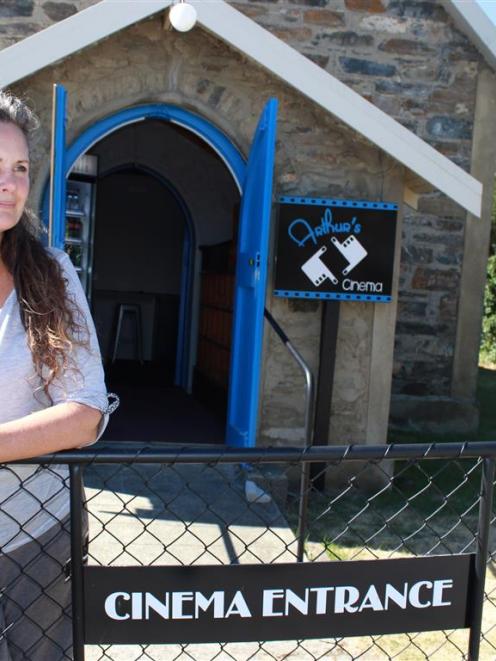 rthur’s Cinema in Cromwell is opened by president PKay Maracin. PHOTO: JONO EDWARDS
A cosy Cromwell community cinema will fire up its projector for its first screening this week.

The 21-seat Arthur's Cinema in Erris St will have its first screening on Friday, fresh with couches and a 4.5m x 2.5m screen.

The first movie will be The Age of Adaline.

Cinema president PKay Maracin said it was a relief to be approaching the first screening as the project had been in the works since 2013.

As part of its resource consent, viewers must become members of the cinema before buying tickets, which costs $20 annually.

More than 250 people had signed up already, she said.

The cinema was made to be a ‘‘cosy'' alternative to watching movies at home.

‘‘It's for people who also want a social experience.''

The cinema is housed in an old Methodist church and named after Leslie Arthur, a Cromwell man who helped build it in 1891.

It would start with an ‘‘ambitious'' six sessions a week, she said.

The cinema would be run by volunteers, and 35 people had already offered to help, she said.

Once it had made a profit, some of the extra funds would be used to pay volunteers, and the rest would be put back into the community, she said.

‘‘We haven't really talked about what exactly will happen to the money.''

One idea was to run a school film-making competition for the district, she said.

It would show second-run films, many of which had not been picked up by cinemas in Alexandra and Clyde, she said.

The cinema group is leasing the building from the Otago Goldfields Heritage Trust for three years.

The renovation budget was $45,000, $42,000 of which came from business and individual donations and fundraising.