The handkerchief carried by Otago soldier George Uren, who was killed at Gallipoli. Photo: Supplied

As the Turkish soldier lay dying, his friend from a neighbouring village, Murat Ali sat to comfort him in his final moments.

Ali dabbed the blood on Yusuf's face with a handkerchief, taken as a trophy of the ``Canakkale War'' just days earlier.

For a century, the bloodied handkerchief - tenderly embroidered and stitched in a strange hand - has been a treasured heirloom of the Oz family in Hacipehlivan, a rural village near Biga, Turkey.

Over a sugary black tea, Yusuf Oz showed it to visitors. Just before he died in 2014, he passed it to his son, Nazmi.

That all changed last year, when a local amateur historian paid them a visit. Canakkale school administrator Omer Arslan was in Hacipehlivan to interview war veterans and their families.

The Oz family with the handkerchief that has been in the family for more than 100 years. Photo: New Zealand Herald

The Oz family told them about the handkerchief. Arslan asked to see it and was able to read some English writing on it - George Thomas Uren.

Arslan did some further research and found that Uren had killed in action at Gallipoli on May 2, 1915.

The diminutive sportsman, volunteer fireman, bachelor, and professional printer at the Dunstan Times in the Clyde office, in Central Otago, volunteered at the outbreak of war. 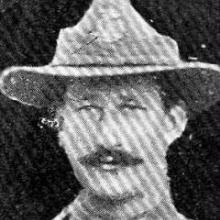 After a brief stop at Egypt, they sailed to the Dardanelles, before landing at Anzac Cove.

Within days, he was involved in New Zealand's first ``big push'' of the World War I - an assault on a small hill, named Baby 700.

The attack, repelled by Ottoman machineguns and mortar fire, was a disaster. Uren died, making him one of 400 men killed or injured.

Darilyn Uren-Perry grew up in Dunedin with a vague notion that a relative had been ``lost in the Dardanelles''.

Many years later, a niece returned from a trip to the Gallipoli peninsula with news that a Uren featured on the memorial at Lone Pine.

Ms Uren-Perry probed the link and discovered the lost link was her granddad's uncle.

On a family trip to the war memorial in Clyde, they found it was incorrectly etched with a `C Uren'.

Then, two years ago, her son Stephen Potter's Year 9 social studies teacher at James Hargest College in Invercargill challenged him to come up with a project to ``make a real difference in the community''.

He researched his forgotten forefather and worked with Central Otago District Council to have the memorial updated to ``G Uren''.

Ms Uren-Perry was happy to have re-established her family's link to the past.

So when the Herald contacted her to ask if she was related to George Thomas Uren, because his Gallipoli handkerchief has surfaced in a tiny Turkish village, she was ``stunned, excited and very emotional''.

``You think these people are gone, because you never met them. You never think they will come back into your lives like this,'' she said.

There are now plans by a Turkish-New Zealand friendship group to fly Ms Uren-Perry to Turkey to meet the Oz family this year, and be reunited with the handkerchief.

``The whanau has just increased. I don't know if they speak English or if we'd need interpreters, but we've got things that go beyond language. I see it as an almost Maori sentiment of, this is whanau, and it has linked the two families together,'' she says.

It never crossed the mind of Nazmi Oz that the artefact could have ever belonged to anyone else.

However, he said his family would welcome Uren's family ``with love and respect'' if they came to visit.

``We would love to hug them,'' the 59-year-old grandfather said.

``I [have] never been to an Anzac ceremony in Gallipoli. I have never met with Anzacs or their families. It's a shame isn't it?''

Asked if he would ever repatriate the relic, Nazmi Oz was torn.

``I don't want to return it, but there should be some other ways. Maybe a photo could be taken, I don't know. It has our grandfather's blood on it. If we have it, it would be better I think. I want to pass it on to my kids.''

More detail on the life and war service of Lance Corporal George Uren can be found on the online site of the Imperial War Museum. Just Google "Lives of the First World War" and enter his name.