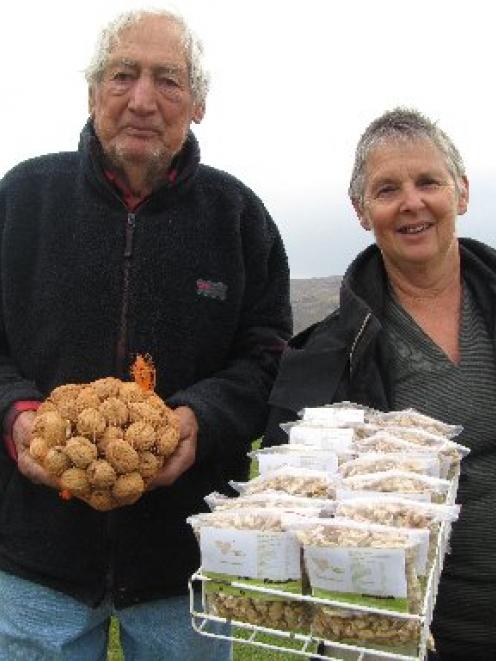 Otto and Valda Muller with the end product - walnuts ready for sale. Photo by Sarah Marquet.
A Bannockburn walnut grower is giving the industry a bit of a shake up with a nut harvester he has invented, capable of harvesting the crop from about 300 trees a day.

Swiss-born Otto Muller has been growing walnuts with his wife, Valda, for about 25 years, first in a small research block but now on a fully organic commercial scale.

Over that time he has invented or built machines to aid in almost every step of the harvesting process.

His latest creation has sped up the most labour-intensive part of the harvest - picking.

The machine, powered by a car motor, is driven up to the tree where a hydraulic clamp closes around the trunk.

The gate on the funnel-like catcher is then closed before the machine agitates the tree.

The nuts fall into the catcher and are funnelled into a bin. Ninety seconds later the tree has been stripped of nuts and the machine is on to the next tree.

Previously, fallen nuts were retrieved from the ground.

Mr Muller had studied engineering and agriculture and worked all over the world before turning his hand to walnut growing.

He said one of the main problems for anyone in the horticulture business was the high labour cost and though walnuts were one of the cheapest crops, his machine had made them a lot cheaper.

He trialled the harvester last year before making modifications. He placed netting around the funnel part, which had previously been all metal.

Once picked, walnuts are de-husked, some done by hand and others in a machine.

The nuts are put in a drying room for about a week before being machine-separated into four size groupings.

The smallest and two largest sizes are sold whole, while the intermediate-sized nuts are shelled with a machine, also invented by Mr Muller.

He said unlike other shelling machines, his one did not damage the kernels and it could shell up to 300kg of nuts per hour. Others he knew of could only process about 9kg of nuts an hour.

From the shelling machine the nuts go through another machine which sorts the kernels from the shells.

She is even about to start producing walnut honey.

Mr Muller's machines, all made in the shed next to his house, can handle almost any kind of nut including the almonds, hazelnuts and pecans the couple also grow.

Though they have 80ha of land, it is not yet fully planted with trees. Mr Muller hopes to fill it up over the next few years.

He estimated, when fully planted, the land would have about 1600 trees, 1100 of which would be walnuts.

"I don't know how many years I have left because I am 88, so I want to make sure they have all the machines they need."

A few years ago he invented a frost-fighting machine which shoots water into a furnace, creating humid air that issucked into a turbine and dispersed over a certain number of trees.

He has a patent for the machine and some of his others, but not the harvester.

"I will be 89 in June and realistically I want to sell the patent to a company that can make and sell them on a global basis, because they have the same problem on a global scale."