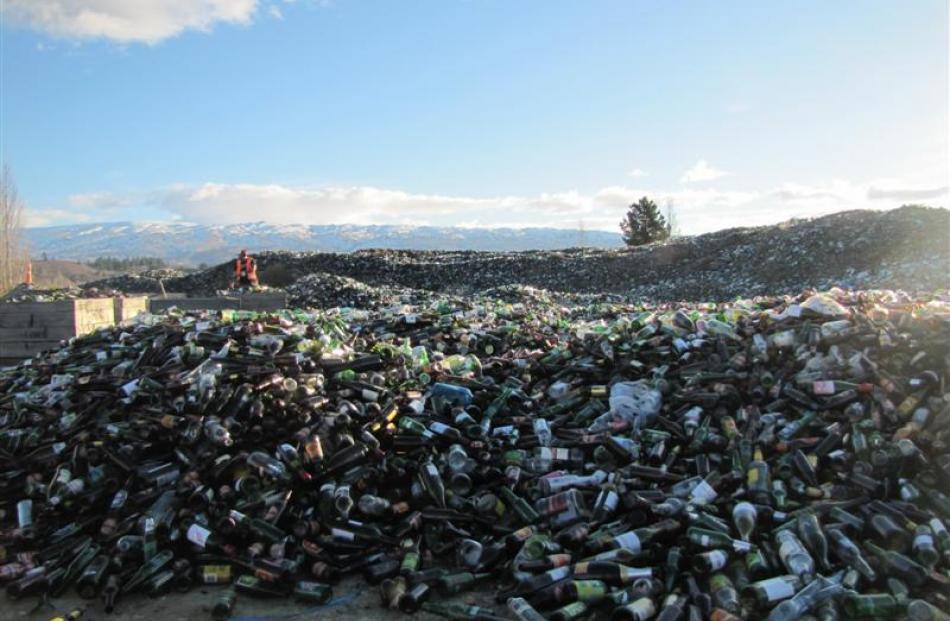 Sione Ah Mann sorts through the clean glass, recently bought in by the recycling truck. In the background is an estimated 2000 tonnes of dirty and, therefore, unsaleable glass. Photos by Sarah Marquet. 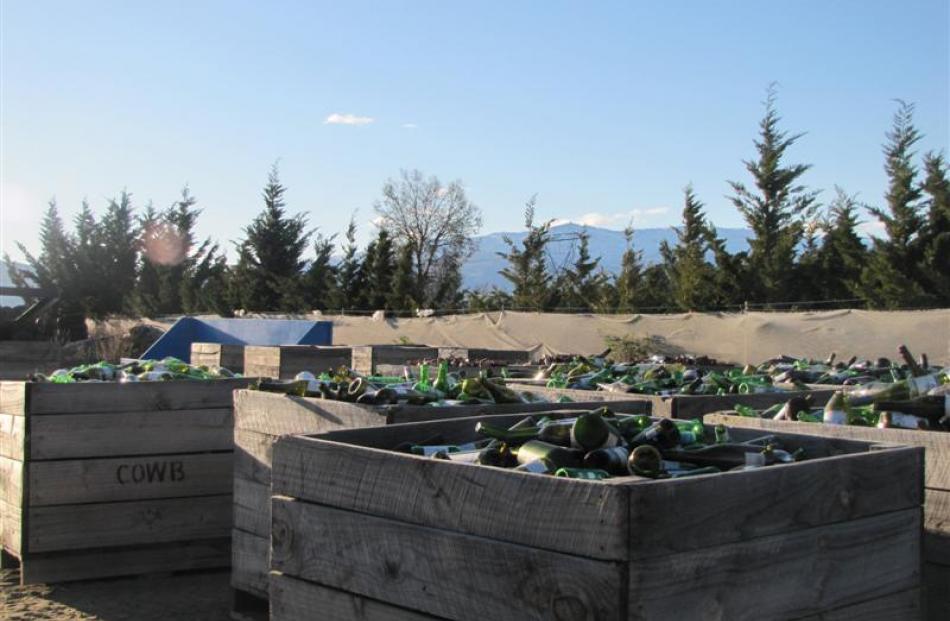 Crates of sorted glass at Central Otago WasteBusters, about to be loaded into shipping crates to be sent to Owens Illinois International, in Auckland.

As recycling awareness grows, so does the pile of glass in the yard of Central Otago WasteBusters. For 10 years WasteBusters has collected glass from the Central Otago region, saving it from going in to landfill. Sarah Marquet investigates the process of glass recycling.

Two years ago, Central Otago had a massive problem with glass recycling - an estimated 4000-tonne problem that was growing by about 51 tonnes a month.

Central Otago WasteBusters began stockpiling glass in April 2000 to prevent it from being dumped, hoping it would become a sought-after commodity, but problems finding a buyer meant a glass mountain grew in its Alexandra yard.

But now WasteBusters hopes it has found markets to reduce the stockpile, along with fresh glass waste arriving at its gate.

Warren Snow, manager of environmental consultancy company Envision Consulting, said the problem with glass recycling began in 1984, when the New Zealand economy was deregulated and import licensing restrictions were lifted, allowing the importation of glass containers.

Another factor was the country's move away from the reusing bottles to recycling.

With so many more containers in circulation, the country's only glass smelter and manufacturer and the biggest consumer of recycled glass, Owens Illinois International, could not use all the glass being collected.

New Zealand Glass Packaging Forum general manager John Webber said that last year, Owens Illinois could process only 55% of all glass recovered, because its two smelters were running at capacity.

The company opened a third furnace in 2010, but started buying glass from Central Otago Wastebusters in April 2009 to stockpile ready for the new furnace.

What they did not know at the time was that each time they pushed the pile around to make room for more glass, they broke bottles or contaminated it with dirt and sand, making it unusable.

WasteBusters had to send 1700 tonnes of glass to a quarry near Lowburn, where it was used as a roading aggregate by Fulton Hogan.

It still has a dirt-contaminated pile of about 2000 tonnes which has been stockpiled over 10 years.

This is likely to be used as cleanfill.

Central Otago District Council waste minimisation officer Sophie Mander said sorting the glass was also a "highly labour-intensive task" but the glass was "not a high-value product" and no money was made from recycling it.

WasteBusters had one employee sorting the glass full-time and although he sometimes got help, the mountain was just too big.

Miss Mander said between July 1 last year and June 30 this year, 592.4 tonnes of glass was recycled from Central Otago Wastebusters via Owens Illinois.

But "from preliminary work we are doing on our waste assessment, we are estimating that a further 483 tonnes of glass are currently going to landfill from Central Otago."

She said the council was "preparing a review of the communities waste minimisation and management plan" which "will include proposals that will help further reduce waste to landfill, but does not include specific actions to target glass material".

A kerbside collection service is only offered in larger Central Otago towns at present, but Miss Mander said the smaller areas would soon be considered for glass collection.

She said she thought this was one of the main reasons why so much glass was still going to the dump. The other reason was "the large 240-litre wheelie bin for refuse means it is easy and convenient for households to dispose of glass, or any other recyclable product, in their kerbside refuse."