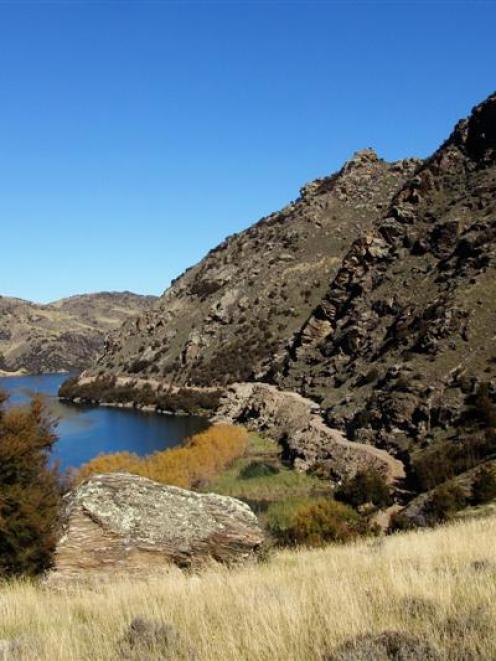 The original alignment would have had cyclists and walkers traversing the Narrows, described in the report as 200m of "particularly active area of landsliding", within the lower 10m of the hillside on "moderately steep" slopes through the "most unstable portions" of the landslip.

The report, by Jeff Bryant of Queenstown-based Geoconsulting Ltd, proposed a new route crossing the section higher up the hillside where the ground was less steep and more stable but still at the same risk from rockfall.

Boulders were an "obvious threat" but the report said little evidence could be found of fresh movement and assumed any rockfalls were of "infrequent occurrence".

It said the potential for rockfalls and the impact they could have on both the trail and trail users was of great concern and suggested removal of rocks that may slip, as well as mentioning other ways to mitigate the risk.

However, it said the cost of those options was not equal to the "perceived" risk to track users and instead recommended signage.

In a statement released yesterday, the cycle trail trust said it would remove obvious loose rock, implement a no-stopping zone in the area, provide clear signage and monitor the area.

The report says the the main "phase" of land movement is believed to have occurred "many ten to hundreds of years ago", though it has moved about 700mm since 1999.

The original alignment of the 34km trail between Alexandra and Roxburgh was based on information from Contact Energy's geologists.