Sculptor aims for essence of Shrek 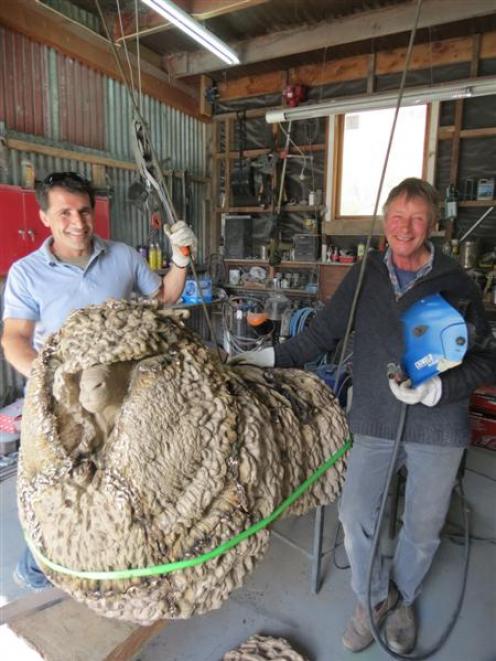 Wanaka sculptor and artist Minhal Al Halabi (left) and welder Laurie Scheib, of Queenstown, take a break from work on a bronze sculpture of Shrek, commissioned by John Perriam. Photo by Tracey Roxburgh.
Capturing the ''multi-faceted personality'' of New Zealand's most high-profile sheep was a challenge relished by sculptor Minhal Halabi.

Central Otago celebrity wether Shrek, who died three years ago, will soon be immortalised in bronze in his hometown, Tarras, as a $75,000 sculpture by Mr Halabi nears completion.

Shrek's owner, John Perriam, commissioned the piece, which will be unveiled later this year in the Tarras village.

Among Mr Halabi's most recognised works are sculptures of William Rees in the Queenstown Mall, Les Harvey in Parnell and Possum Bourne, previously on the Pisa Range and now relocated to Pukekohe.

Such pieces had all been ''really special in their own way'' but working on the Shrek commission was ''a huge highlight'', the Queensberry Hills artist said.

''[Shrek] has an amazing connection with the people and also overseas ... the whole story is very cool and captured the imagination and to be working on it is really cool.''

Working from photographs of Shrek, Mr Halabi spent several months creating the clay model from which the bronze was cast.

''Some of the photos I looked at, he looked really mysterious, that he'd run away and was a renegade.''

In others, he appeared as a ''cuddly ball of wool'', particularly when pictured with children.

''He has a multi-faceted personality ... you're making a sculpture of not just any sheep ... he's a character.

''He's a cylindrical kind of a thing, but I tried to put as much detail as I can and to create a demeanour because ... I wanted some of that personality to come through.''

The completed moulds, slightly bigger than life-size, were taken to a foundry in Wellington, which used the traditional ''lost wax'' casting method.

This week, Shrek's bronze parts were shipped to Queenstown, where Mr Halabi has been welding them together with friend Laurie Scheib.

The process is expected to be finished next week.

Mr Perriam was ''pretty excited'' about the ''magnificent'' sculpture of his late companion.

It would be mounted atop a 15-tonne rock brought down from near the cave where Shrek lived high on Bendigo Station, he said.

The public display would also include memorial plaques for Hawea Flat man Hayden Mapp, who was killed in a car crash in May three days after retrieving the rock, and shepherd Ann Scanlan, who caught Shrek in 2004 and died of cancer, also in May.

The long-awaited opening of a Shrek exhibition at Te Papa museum featuring the merino's mounted outer body is scheduled for October 31.