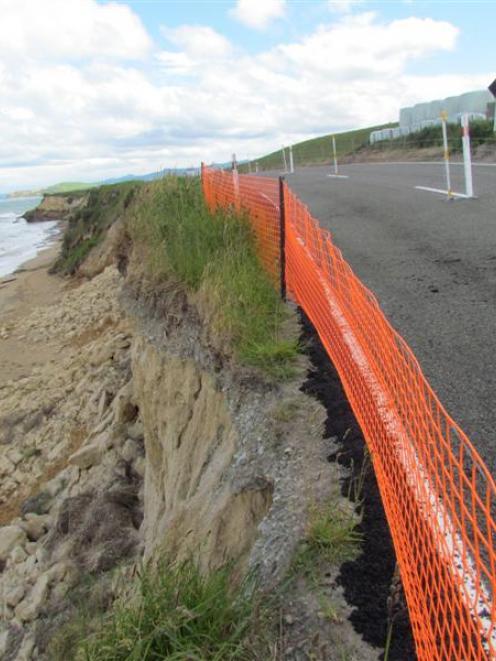 Erosion encroaches on Waianakarua Rd. Photo by Andrew Ashton.
A group of Waitaki businessmen who were just weeks away from beginning erosion protection work to shore up a coastal section of Waianakarua Rd are dismayed that parts of the roadside were swept into the sea earlier this week.

The Waitaki District Council closed one lane of a 200m section of the road at Orere Point on Tuesday, after parts of the road shoulder broke away as a result of coastal erosion, leading some to fear that the road could close for good.

The Waitaki Forward group, formed by 12 local residents, began investigations into how best to guard against erosion eight months ago, and work to build a 12m concrete wall was just weeks away from starting, but group member Alan McLay said the new slip had now expanded to about 60m in length.

The road was of "major importance" to the local economy and, although repair was still possible, it would need "huge input" from the local community because they now feared the council did not have "the heart or will" to keep the road open, Mr McLay said.

"It's huge news for tourism long term. It's one of the few coastal roads left without a major detour between Christchurch and Dunedin, and it covers some beautiful scenery.

"This is going to be a big deal when people realise it's at risk of closing."

Council roading manager Michael Voss said the single lane and a temporary 30kmh-per-hour speed limit had been put in place until the situation could be fully assessed.

"The road at this location has been undermined by the sea to the point where slippage has occurred and it is no longer safe to keep the two lanes open. We now need to fully assess the situation to determine what the longer-term options are."

A full assessment would take about one month to complete, but contractors would be putting in place semi-permanent railings and signs over the next couple of days, Mr Voss said.

"The first priority is ensuring the area is as safe as possible for road users before we undertake the full assessment." The council had no intention of closing the road for good, and he would meet New Zealand Transport Agency representatives on Monday to discuss funding options, he said.