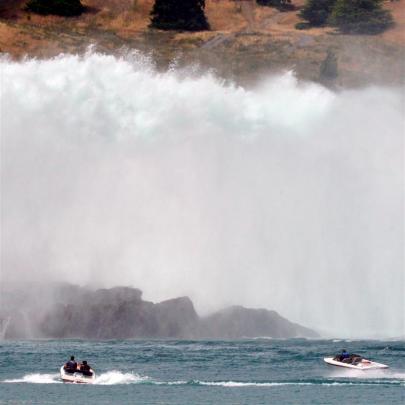 Water pours from the spillway of the Benmore dam at the head of the Waitaki Valley yesterday, following this week's heavy rainfalls. Photo by Gerard O'Brien.

Following the decision by Meridian Energy to start spilling water from Lake Pukaki on Wednesday, after days of heavy rain, more spills have taken place along the Waitaki Lakes hydro dams.

Heavy rain earlier in the week had raised lake levelsat Lake Pukaki to 532.88m, which resulted in the need to spill water, and Meridian spokeswoman Michelle Brooker said spilling had now also started from Benmore and Aviemore.

He said care should also be taken with the Ohau and Tekapo rivers, which flow from their respective lakes into Lake Benmore.

''And the same goes for the lower Waitaki River,'' he said.

Spilling also occurred at Contact Energy's Roxburgh dam, to flush sediment and reduce the risk of flooding to Alexandra.

The level of Lake Roxburgh was lowered from its usual level of 132m above sea level to 126m.

Contact generation manager Graham Quinn said the flushing was expected to take three to five days, subject to the flow of the river.