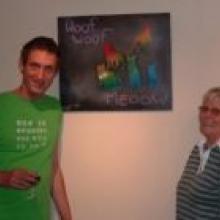 Mike Plant and Linda Smart at the SPCA's silent auction. Photo by Kay King.
The North Otago SPCA is on the way towards building a new $200,000 shelter, after a silent art auction last week raised $2565.

The auction ended with a function at Gallery Picture Framing on Friday night, when buyers of the art works had a chance to meet the artists who had donated them.

SPCA president Kay King said yesterday that people were impressed with the quality of the 33 auction items, ranging from paintings and jewellery to witch figurines and a quilt.

‘‘They were also amazed at the variety of hidden talent in North Otago,'' she said.

The money raised will go solely towards the new shelter, in a building offered by Vetlife Oamaru next to its new premises on the corner of Thames and Torridge Sts.

The new shelter is needed after the branch's Stuart St premises failed an RNZSPCA inspection.

The SPCA has appointed a project manager and is working on plans for the shelter and fundraising. Mrs King said it also planned to erect a ‘‘cat barometer'' to record fundraising for the new shelter.

• About a dozen feral cats have been trapped so far in Oamaru by the North Otago SPCA, part of an annual service provided by the society.  The society has also retrieved about 10 kittens.

SPCA shelter manager April Gilchrist said yesterday that the society used humane cage traps to catch the feral cats, setting them in the business area and problem residential areas around the town.

‘‘We concentrated on the business area heavily last year and people have noticed a substantial decline in numbers,'' she said.

Feral cats caught in the traps undergo a temperament test to see if they can adapt as pets. Some are spayed or neutered and returned to the area where they were trapped, to stop other feral cats moving into new territory.