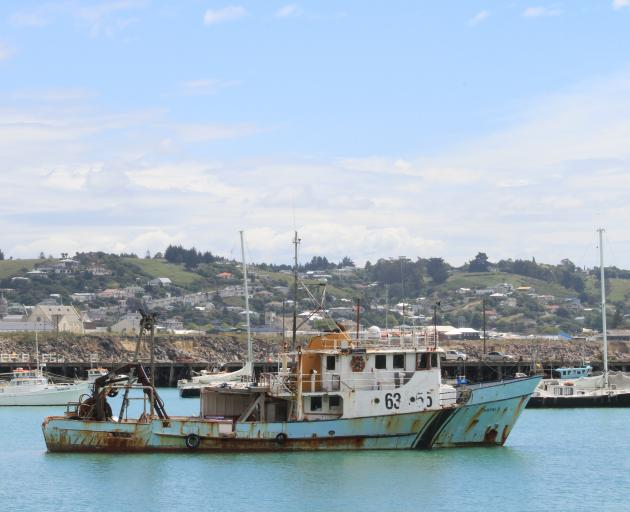 A large vessel is temporarily anchored off Sumpter Wharf at Oamaru Harbour. ORC harbourmaster Steve Rushbrook says the council is discussing options with the owner for the berthing, or mooring, of the vessel. Photo: Hamish MacLean
A former Australian fisheries research vessel - with indirect links to convicted fraudster Michael Swann - is temporarily anchored off Sumpter Wharf in Oamaru Harbour.

Kapala had been in Oamaru for "several weeks" and was previously stranded on the beach of Stewart Island after breaking its mooring, before it was purchased by its current owner, Otago Regional Council harbourmaster Steve Rushbrook said.

"It turned up unannounced [at Oamaru] and berthed alongside the wharf. ORC and the Waitaki District Council worked to identify the owner, and we are now discussing options with them for the berthing/mooring of the vessel," Mr Rushbrook said.

"This process is ongoing and likely to take a number of weeks," the harbourmaster added.

"It is currently anchored at the temporary anchoring location as allowed by ORC's navigational safety bylaws 2019."

In 2014, the Otago Daily Times reported the then Dunedin-based vessel was used in work on a harbour basin slip.

And at that time, it was reported Kapala was owned by Harold Cave, of Christchurch.

Mr Cave had appeared at Mr Swann's parole hearing in 2013. Mr Cave drove Mr Swann from prison on his release a month later.

The ODT then received a tip-off that Mr Swann could be sailing the vessel to Christchurch to live on.

Mr Swann spent four years and eight months in jail for his part in defrauding the former Otago District Health Board of $16.9 million.

Social media reports last month identified Glen Perham as the owner of the boat; Mr Perham did not immediately respond to a request for comment yesterday.

Mr Rushbrook said the boat was considered seaworthy, "having travelled safely from Stewart Island to Oamaru".

"It appears well-constructed and to have a sound hull," Mr Rushbrook said.

"Despite the boat being the largest vessel at present in the harbour, the only size restrictions for boats in the harbour was they were able to safely enter and exit the harbour entrance, and the depth of water will often be a determining factor for that".

Really? This is news?

Slow day in the newsroom for sure.