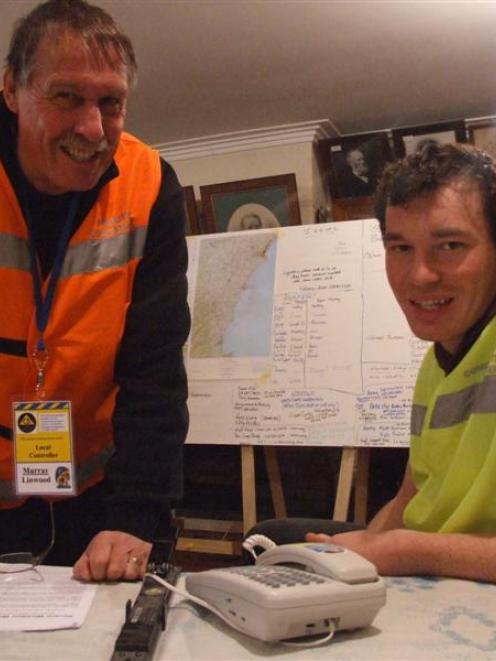 He has been busy dealing with media inquiries and preparing press releases at the Waitaki Civil Defence headquarters to keep the public informed about the effects of widespread flooding in the district.

Up at 5am yesterday, with a new update issued by 5.45am, Mr Ridley said it was very important to have all information on hand to give to the media so they could give it to the public.

Asked whether he was getting tired, Mr Ridley said he was "wide awake and happy to keep going".

"There's something to do. You stick your head down," he said.

That involvement spanned back to when he was living at Kurow and there was a major flood at Hakataramea in the 1980s.

Back then, it was dealt with without having a structure - structures were put in place after it - and communication was much different from today.

Mr Linwood has been involved with the operation this week since attending a meeting on Monday afternoon called by the council's emergency services manager Chris Raine. He was back at the Civil Defence headquarters at 6am the following day.

Fortunately, there were four controllers, who rotated the job, which made it "particularly manageable", Mr Linwood said.

The role was all about "looking at the big picture", making sure the headquarters was operating effectively, dealing with emergency services and keeping other key people and organisations up-to-date with what was happening.

"We're in a co-ordinating role, managing information and monitoring."

At the peak, there were about 25 people at the Civil Defence headquarters and some had been working 16-hour days.

Having the resources of the New Zealand Army had been very valuable and the Unimogs had been great for going places inaccessible by four-wheel-drive, Mr Linwood said.

Advances in technology meant the situation was being dealt with in a different way to even just five years ago.

It also had created a hassle that Mr Linwood had not experienced before - motorists relying on GPS devices and sticking to those routes, even if affected by floodwaters.

Use of Civil Defence information on the council's website "skyrocketed" during the week, peaking at about 9000 hits on Thursday - nine times the normal level. That was a "really great source" of information for the public and staff had been keeping it as up-to-date as possible, Mr Ridley said.

Civil Defence had received a "fantastic" response from the wider community, with offers to help. That included people filling sand-bags to builders and contractors calling to say they were available and it "said a lot" about Waitaki, he said.

While Civil Defence provided food for those at the headquarters, there were also public organisations dropping off contributions.

During the past week, they had been fuelled by sandwiches, pies, soup, cheese rolls and cakes - and a lot of coffee, Mr Ridley said.

As well as dealing with the situation, those involved were also looking to the future and how they could improve the operation for the next eventuality.