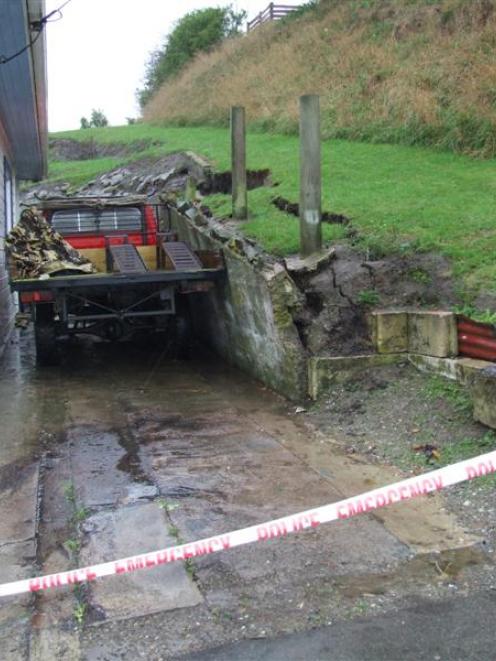 Saturated land behind this Aln St house collapsed a retaining wall on to a ute on Friday night, causing the evacuation of the house. Photo by Sally Rae.
The rain might be over, but motorists in the Waitaki district have been reminded there are pot-holes and debris "everywhere" as a result of the prolonged flooding.

On Saturday, State Highway 1 south of Oamaru was closed for about seven hours due to flooding at Big Kuri Creek, just north of Hampden. No detour was available.

Traffic was backed up but most motorists were good-natured about the delay, although they were keen to know when the road was likely to be reopened.

Jeff Thompson, who was heading home to Dunedin after visiting friends at Ngapara, had been waiting for about two and a-half hours and was "trying to snooze" to fill in time. He was contemplating turning back and joining a friend at the Maheno Tavern to sit out the delay.

For a while on Saturday, even the detour was closed, meaning the main routes in and out of Oamaru were both blocked.

As of yesterday, 50 rural roads in the Waitaki district remained closed.

Civil Defence had been warning motorists to avoid all travel unless completely necessary, and pointing out motorists travelling on closed roads risked voiding insurance cover if they had an accident.

The rain eased on Saturday night, and volunteer staff at Waitaki Civil Defence were stood down after five days on alert. Many of the team had been working 16-hour days because they continued in their usual jobs.

Palmerston's water supply was turned off on Saturday because the water flowing from the Shag River was dirty. The water reservoir holds two to three days' supply, and it was hoped the town's water could be turned on again as soon as the river dropped.

Residents are being invited to fill containers with fresh drinking water at the Whitestone Contracting yard in Palmerston.

The army delivered 20 jerry cans of water by Unimog truck to the hotel at Dunback for distribution to consumers.

Consumers on all rural water supplies were advised to conserve water. Some rural residents were running out after flooding closed supply schemes.

People who had run out of drinking water could fill their own containers at the Herbert Garage and the Papakaio Hall.

Three houses were evacuated in Aln St, Oamaru on Friday night after land behind one collapsed a retaining wall on to a ute.

Engineers assessed the damage and the three residents had since been allowed home.

An empty holiday home at Moeraki was hit by slumping and other slumping had occurred in the township. A slip was reported at a property in Walsh St, Shag Point.

The rain had caused delays, inconvenience and "more than a little damage", but thankfully there had been minimal risk to people's safety, he said.

Waitaki Mayor Alex Familton was unable to get to Oamaru because flooding cut off his home south of Palmerston, but other councillors spent time at the Civil Defence headquarters and commented positively on the teamwork shown.

The council's emergency services manager, Chris Raine, indicated there would be a debrief to discuss what worked well and what could be improved, Cr Kircher said.

By yesterday afternoon, a Facebook page called I survived the Oamaru flood ... had 767 members, with some posting photographs and videos of flooding.