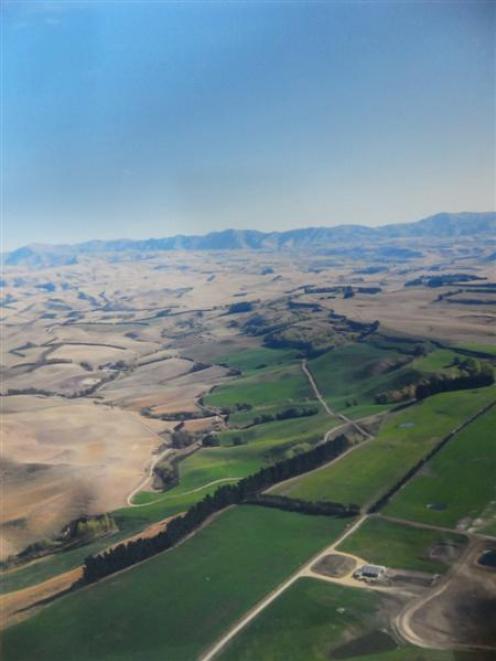 It's a pun, but the trickle-down from new irrigation in North Otago is evident in all sectors of the community.

And it's the old story - when farmers are doing well, so is North Otago. When they shut their chequebooks, all North Otago suffers.

The figures for the first stage of the North Otago irrigation scheme, opened in 2006, tell the story, and here comes the second stage.

The farmer-owned North Otago Irrigation Company which operates the scheme has now committed to a $53.2 million expansion of more than 10,0000ha, based on farmers' response to buy shares.

Not only will it take water to traditionally drought-prone land between Five Forks and close to Herbert, it will further stabilise and boost North Otago's vital agricultural economy and, consequently the district's economy. 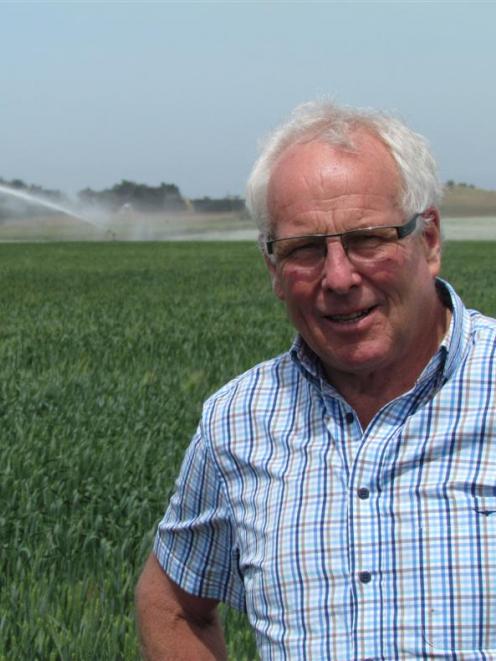 Arable farmer John Webster is a firm believer in the benefits of irrigation for the whole community. Photo by David Bruce.
An economic benefit study in 2010 of stage 1 said it was ''the single most significant economic development'' project in the Waitaki district in recent years.

Until then, and before dairy prices boomed, then collapsed, it had created 76 jobs on farms that now earn $44 million a year more than before. Since then, on-farm development has continued.

More people now live in the irrigated area, many of them young families, which had brought community and social benefits such as increased school rolls.

It also contributed to population growth in the district.

Business people in Oamaru can point to very tangible gains through the whole of the economy, not just from a more stable agricultural sector but new businesses and increases in jobs in existing businesses.

These have resulted in demands for all services, from motorcycles to new houses, and new farm service companies, particularly related to irrigation.

That was echoed by Otago Chamber of Commerce North Otago spokesman Simon Berry who was pleased with the decision.

''The benefits will be felt far and wide through the whole community. The knock-on and trickle down (from stage 1) has already been shown to be major,'' he said.

In terms of new businesses, the chamber had noticed not only people returning to Oamaru but also coming in to set up new businesses, he said, quoting the Tees St Cafe and Scott's Brewery as recent examples.

Another example was an Oamaru company which was building dairy sheds but had now expanded in to prefabricated buildings and housing which it was selling, not only in North Otago but other expanding regions.

''There are the irrigation servicing companies who are growing or have moved in to town to support the development.''

All that activity was benefiting sub-contractors such as painter and plumbers.

''Anyone who tries to get a tradie will know that.''

That was all a direct result of irrigation, Mr Berry said.

The Oamaru-based company works in the North Otago, Waitaki Valley and Maniototo regions on dairy sheds, renovations and this year had expanded to include prefabricated house built in a yard in Thames Highway.

The growth in irrigation had created a demand for renovations, new homes and other buildings, he said.

North Otago Motor Group chief executive officer Peter Robinson said sales through the Holden-Toyota dealership had increased about 30% over the past two years.

''We sell big-ticket items, so that's quite amazing,'' he said.

While the rural sector had dominated in terms of utilities and SUVs, sales had been strong across all sections of the community. That included farmers and workers, some from overseas, who had relocated to Oamaru.

The strength of the economy from irrigation had boosted confidence to spend, from business people to elderly.

''Everybody feels good when the economy is doing well, shops are full, there are people in town and house prices are going up,'' he said.

Arable farmer Jock Webster was chairman of the company when it was planning the scheme, through its construction and official opening, convincing people that, despite its high initial build cost of more than $60 million and operating costs, it was worth it.

Now, he envisages the second stage bringing similar benefits as the first, particularly for the whole district.

''It think it's great there has been sufficient take up from farmers for the second stage,'' he said.

When the first stage was planned, enough water was consented and capacity built into the scheme for a second stage.

He always hoped the second stage would go ahead, but it was originally quite different from what was now being proposed.

Then, it was envisaged the expansion would fill in areas of the Waiareka and Kakanui Valleys, rather than expanding south as far as it was now proposed.

''It is a very good option to go there (south) because of future possibilities and the demand.''

Mr Webster said the way the water would be used was an individual decision by each farmer.

Based on feedback he had received, some were planning to irrigate their whole farm, probably for dairying.

However, others had only bought enough shares for water to irrigate part of their farms, and would be looking to ''drought-proof'' their land use.

He also believed the dry spell had encouraged farmers to take up water.

• June, 2003: Resource consents issued for 8 cumecs of water and land use by Environment Canterbury and Otago Regional Council.