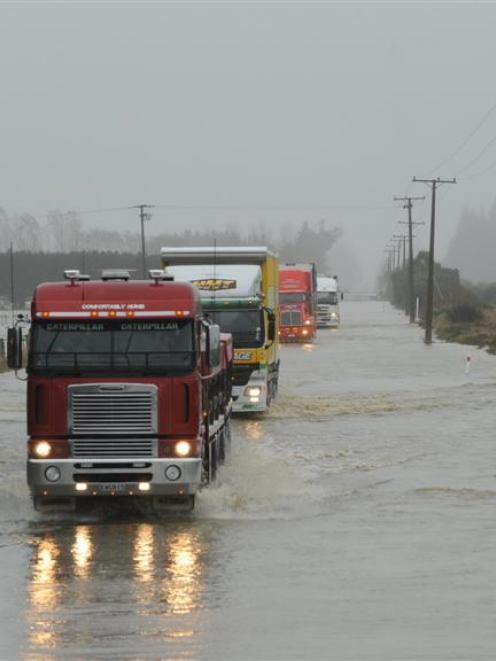 Waitaki's chief executive Michael Ross said yesterday he had discussed the issue with his Otago council counterpart, Graeme Martin, and both would be offering the agency (NZTA) assistance.

Both councils and the NZTA recognised there were serious issues with flooding north and south of Oamaru.

"What we don't know at this stage is the exact cause, or whether there is just one or several contributing elements," Mr Ross said.

While the NZTA was clearly responsible for solving the problem, which closed SH1 at Hilderthorpe for long periods during flooding at the end of May and at Queen's Birthday weekend, other organisations and groups should be involved.

"We will be suggesting the NZTA organise some sort of forum soon so all parties can have an input," Mr Ross said.

The NZTA had employed consultants to investigate flooding at Big Kuri Creek (near Hampden) and Hilderthorpe (north of Pukeuri). Once possible solutions had been identified, a discussion paper would be prepared and other interested parties would be consulted.

Repairs, estimated to cost about $1.5 million, are still being carried out on North Otago roads damaged during the flooding.

At the peak of flooding, the council issued more than 120 road closure notices, but moved quickly once water dropped to effect temporary repairs.

Its roading manager, Geoff Young, said yesterday several crews were out working across the district.

Some routine maintenance and renewal works, such as unsealed road metalling, had been deferred until conditions permitted, although some routine works would be incorporated with the flood repairs.

Two roads remain closed - Kakanui Valley Rd at the Kauru River bridge, where repairs were expected to take about four weeks, and Ngapara Georgetown Rd, where work would begin shortly.