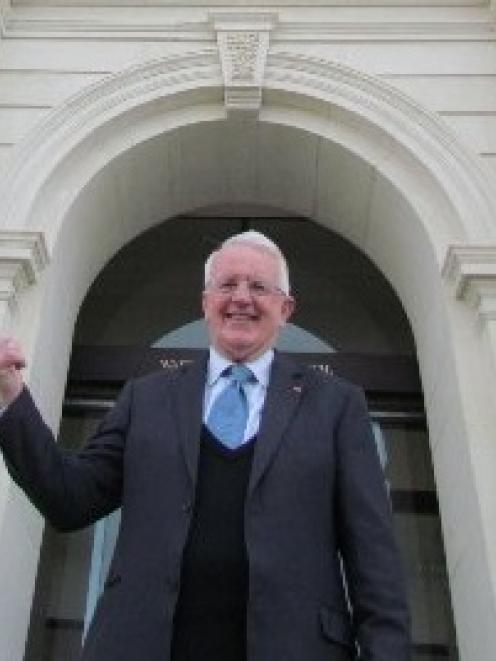 Waitaki Mayor Alex Familton with the council office building in Oamaru. Photo by Andrew Ashton.
The Waitaki District Council headquarters in Oamaru is one of just two council-owned buildings known to be potentially earthquake-prone, according to the preliminary results of a seismic rating survey.

The council began a study to determine the seismic ratings of its buildings following the Canterbury earthquakes and the conclusion of the subsequent Canterbury Earthquake Royal Commission (CERC).

Although 14 buildings have still to be assessed, 11 of the buildings already assessed meet the required one-third of new building standards (NBS), which would see them classified as not earthquake-prone.

However, the council headquarters on Thames St and the Te Mahi storage building at Oamaru Harbour were both found to be below the 34% of NBS requirements.

The Oamaru Opera House, the Forrester Art Gallery and the Centennial Park Grandstand were all found to be 34% of NBS, while the Moeraki Coronation Hall was 80% and all Oamaru Airport buildings were assessed as being ''close to 100%''.

The North Otago Museum in Oamaru, the Oamaru Public Library, and the Omarama, Windsor, Kakanui and Hampden Fire Stations are all among the buildings yet to be assessed.

Council strategy group manager Richard Mabon said another 26 rural-based community halls around the district would not be assessed because they might fall within the exemption for buildings where the effects of failure during an earthquake were likely to be minimal, while the Omarama and Weston halls had only recently been upgraded.

''Those upgraded recently are likely to be compliant.''

He said surveying work on the council headquarters, which was built in 1884 of Oamaru stone, first started over a year ago, but other buildings had been surveyed since December.

''We are working through buildings on a priority basis and I am hopeful that we will have made substantial progress with initial assessments on all our properties by June 30, 2014.

''Final assessments for buildings that do not meet 34% of new building standard will be sought.

"The number of those, and time required to obtain the final assessments, is unknown at this point.''