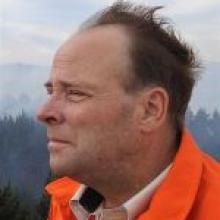 Chris Raine
Every cloud has a silver lining: at least something positive has come out of flooding which hit North Otago after heavy rain at the end of May.

That had prompted inquiries from people wanting to be involved as volunteers when there were civil defence emergencies in their local communities.

Interest was being shown from Oamaru, Maheno, Kakanui, Ngapara, Windsor and Moeraki.

Those inquiries were being followed up, Mr Raine said.

The heavy rain, followed by snow, for a period of seven days from May 26, caused extensive flooding through the district, but was mainly confined to the coast.

Mr Raine said with warnings from MetService, no loss of life, injuries or stock losses occurred.

However, damage to roads was estimated about $1.5 million.

Civil Defence managed the flooding as a non-declared emergency, fully activating its headquarters in Oamaru and posts in outlying communities.

Mr Raine said each civil defence post had held de-briefings, and lessons learnt from the emergency would be applied in the future.