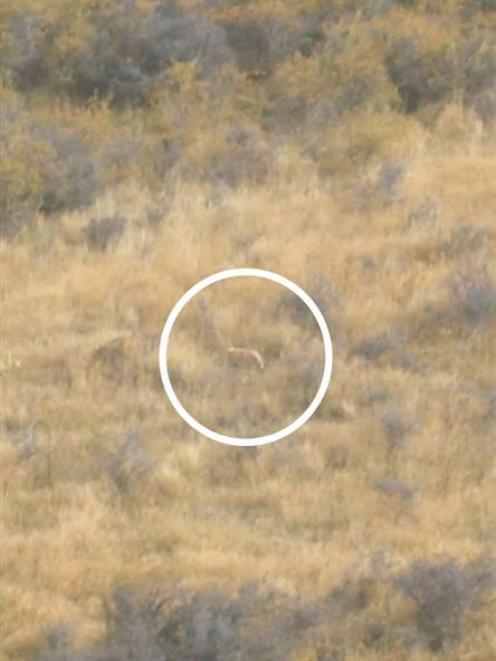 A pair of Scottish tourists were surprised when they saw and photographed this cat-like animal (circled), which they claim was similar in size to an Alsatian dog, near McLeays Creek on the Lindis Pass. Photo by Charlie Limond.
The Himalayas had their Yetis, while Canada's Sasquatch was known informally as "Bigfoot".

And now, the Lindis Pass hill country may - or may not - have its "Big Ginge".

Scottish tourists Charlie and Marie Limond photographed what they described as a "lynx-sized mountain lion", at McLeays Creek in the Lindis Pass.

"It was definitely way bigger than your domestic cat. About the size of an Alsatian dog," Mr Limond told the Otago Daily Times yesterday.

The couple were driving along State Highway 8, through the Lindis Pass, last week, when Mr Limond said he saw the animal "out of the corner of my eye".

They turned their car around and said they watched the big cat, about 200m away, from the roadside for about seven minutes.

"I got a real good look at it through my binoculars. Our small digital camera wasn't able to get a decent photograph, but it was the same goldy colour as a mountain lion," he said.

Mr Limond was unshaken in his belief he had seen a "small lion-like animal". He based his claims on having been to Africa and seen lions at game parks.

However, Wanaka Area Department of Conservation manager Paul Hellebrekers said the couple may have sighted an extremely large feral cat.

"There is nothing to substantiate that we're not just dealing with a very large cat," he said.

Dunstan Downs Station farmer Geva Innes laughed when the Otago Daily Times contacted her to ask whether there had been any reports of a "big ginger tomcat the size of a small lion" stalking the hills.

"We shoot feral cats round here," she said.

The feral pests often roamed the hills and grew big. Feral cats could also carry the disease toxoplasmosis, which caused abortions in sheep, she said.