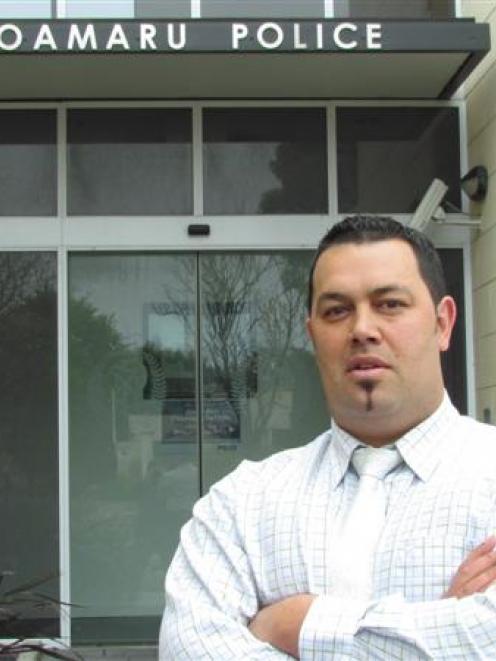 Detective sergeant Dan Keno outside the Oamaru Police Station on Tuesday. Photo by Ben Guild.
Oamaru-born Dan Keno has returned home to head the Waitaki CIB. Ben Guild caught up with him on his second day in the job.

Newly-appointed Detective Sergeant Dan Keno has long been cast in defensive roles. He has tackled gang violence in Palmerston North, offenders in Oamaru, Lower Hutt, Greymouth and Auckland, and numerous burly opposition attackers while playing in the midfield for the West Coast rugby team.

But sitting in the unfamiliar role of answering questions instead of posing them upstairs in a Oamaru Police Station interview room yesterday, he expected his new position to be one of the toughest yet.

The role of detective sergeant is "viewed as one of the biggest challenges in the office", he said.

The job takes him "one step back from locking people up" by handing him the responsibility of managing criminal investigations anywhere in the near 7151sq km that constitutes the Waitaki region.

Det Sgt Keno, who grew up in Oamaru and attended Waitaki Boys' High School, described his new role as overseeing what was happening in the area, then "accessing the relevant information and deciding what action will be taken".

It is not purely strategy based, though, as the detective sergeant's role maintains an investigative capacity alongside the four full-time CIB officers under his control.

He praised the legacy of former colleague Det Sgt Mike Ryder, who had "left behind a really strong office in terms of their investigation".

Policing in a small town was a lot different than in larger centres, he said.

"In the big cities you're just another number really.

"I guess the thing in Oamaru is that it's of such a size that everybody knows everybody else."

As such, it was of added importance that officers instilled a sense of belief in the police in their communities which gave conflicted witnesses the confidence required to come forward.

While such community interaction was not explicit in the job description, the "police does attract the sort of responsible citizens who like getting out in the community", he said.

His growing family will soon form part of that community, as his wife, described as a "local girl", and four young children are accompanying him to Oamaru.

Career highlights had previously included spending six years in Lower Hutt, which involved homicide investigations and dealing with gang tensions - most notably surrounding the shooting death of 16-year-old gang affiliate Wallace Whatuira on Waitangi Day in 2002 - and the three years he spent in the CIB in Greymouth patrolling the entire West Coast.

Enabling resolution was the best part of his job, he said.

"It's the reward that you get in the end," he said.

"When you can phone the victims and give them the outcome."