No room at inn for cats over Christmas 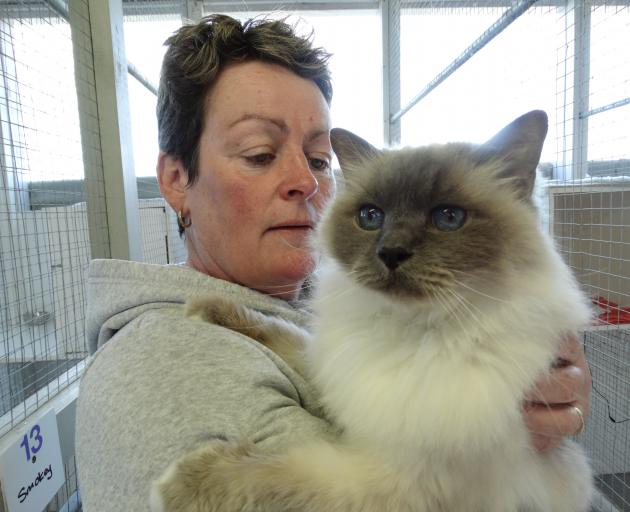 Paws a While co-owner Jill Campbell with Smokey the cat. The Oamaru cattery is fully booked for Christmas, and spaces are at a premium at others. Photo: Daniel Birchfield
If you are looking for a place for your moggy or pooch to stay over the Christmas break, you may have left it too late.

Both of Oamaru's catteries - Paws a While and Ritz on Reservoir, which is also a boarding kennel - are fully booked from mid-December to mid-January, and Highfield Boarding Kennels in north Oamaru and Goodwood Kennel and Cattery in Palmerston are filling up fast.

Ritz on Reservoir owner Gary Ingram said his 30 kennels and 16 cat cages had been snapped up by mid-August.

A lot of people booked well in advance, in some cases a full year before heading away.

''Probably 50% of our Christmas bookings come back from their Christmas break and say 'book us in for the same dates next year'.''

He had five names on his waiting list, but said it was unlikely that many spaces would open up.

Paws a While co-owner Jill Campbell, who can house up to 24 cats, had 13 names on her waiting list.

With few other options available in Oamaru, many were forced to look further afield to the likes to Timaru, Palmerston and even Dunedin to house their pets.

Goodwood Kennel and Cattery owner Clare Wellington was ''not quite booked out'' for the holiday period, but expected to fill her 60 kennels and 25 cat cages sooner rather than later.

Several bookings had come in from Oamaru pet owners, she said.

''I had a lady ... she couldn't believe everything was booked out in Oamaru.''

While she had some spaces available, like others she would be booked up over Christmas.

She advised people to get in early, as pet accommodation was at a premium in Oamaru.