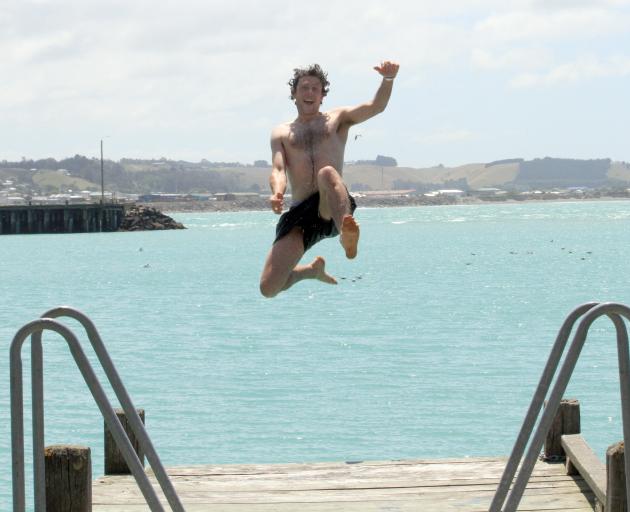 Celebrating his 26th birthday, Henry Elsom, of Oamaru, jumps off a jetty at Oamaru Harbour yesterday. Photo: Hamish MacLean
While the mystery around fuel seeping into Oamaru Harbour remains, summer recreational water testing has begun and the results so far have been ‘‘very good’’.

The Otago Regional Council yesterday confirmed it had begun testing for so-called faecal indicator bacteria in the harbour — well-known for its abundant birdlife — but the level of Enteroccoci in the water was very low.

‘‘ORC has begun sampling water quality at Oamaru Harbour following concerns raised by a member of the public. Water quality in the harbour has been very good so far this season, council environmental resource scientist Rachel Ozanne said.

The council anticipated Oamaru Harbour would become ‘‘a fixture’’ of ORC's seasonal recreation water quality monitoring and results would be published to Lawa's website along with other monitoring data.

Like E. coli in freshwater, Enteroccoci in coastal water is used to determine the amount of faeces present.

Results provided by the Waitaki District Council, which has been testing the water in the harbour, since August, were also good.

The council tested water in five locations — at Holmes Wharf; at three locations near Sumpter Wharf, which is home to the world’s largest Otago shag colony; and at two locations at Friendly Bay — and levels were low in October, November and December.

Council property manager Renee Julius said the testing was done ‘‘to ensure the water was safe’’ for contractors working on repairs to Holmes Wharf.

ORC regulatory general manager Richard Saunders said the council had received no information from the Oamaru fuel company ordered to dig up underground storage tanks at the harbour after an occasional sheen near the Esplanade.

Late last year, McKeown Group managing director Ken McKeown said the tanks were removed and ‘‘proved not to be the problem’’.