Passion for rugby club in the wash 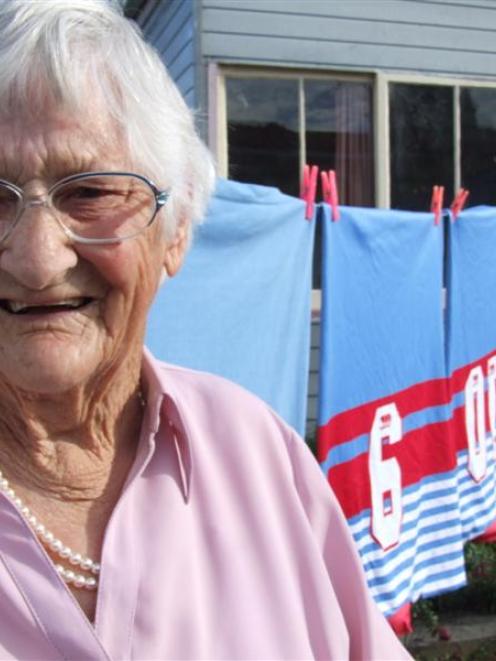 She has washed the senior team's jerseys for about 30 years, hanging them neatly on the neighbour's clothesline in numerical order, using matching clothes pegs.

And there was no new-fangled technology for Mrs Chamberlain, who meticulously washed the jerseys using her wringer washing machine.

Only this year has she given away the job, because of failing eyesight, handing the task down to daughter Judy - along with the wringer as her family have bought her an automatic machine.

Not that she was overwhelmed by the new machine - "it's all right, I'm going to get used to it" - and she reckoned the wringer got the clothes cleaner.

Mrs Chamberlain's dedication and passion for the club has been rewarded with the announcement this week that she has been made the club's first female life member.

Mr Chamberlain played for Waimate until 1959 and then started coaching in 1961.

The couple had 13 children - "we bloody near had our own rugby team", quipped one of their sons, Graeme "Chum" Chamberlain - and the Chamberlain name is synonymous with the rugby club, with numerous members of the family having been involved with it.

Yesterday, surrounded by her very proud family, Mrs Chamberlain said she had washed the jerseys "just for the love of it".

It was a job she had enjoyed doing and she had always loved rugby.

She got a "hell of a shock" when she heard she had been made a life member.

There are more than a dozen scrapbooks at her home filled with cuttings about rugby and the club and rugby photographs on the wall.

Rugby and family have been her life.

Asked about the fortunes of this year's Waimate senior team, Mrs Chamberlain said "they aren't going very well", despite the fact her son Tony is the coach.

However, Tony Chamberlain was expecting the team's fortunes to improve against Geraldine - another brother Stephen is the Geraldine manager - in Waimate on Saturday.

And the Waimate Senior B's will be playing for a silver tray, in memory of Cyril Chamberlain, when they play the Geraldine Senior B's.

Mrs Chamberlain's grand-daughter Jess Bailey is secretary of the Waimate Rugby Football Club and her husband Todd will be playing in the Waimate Senior Bs.