Primary school about to lose its 'guardian angel' 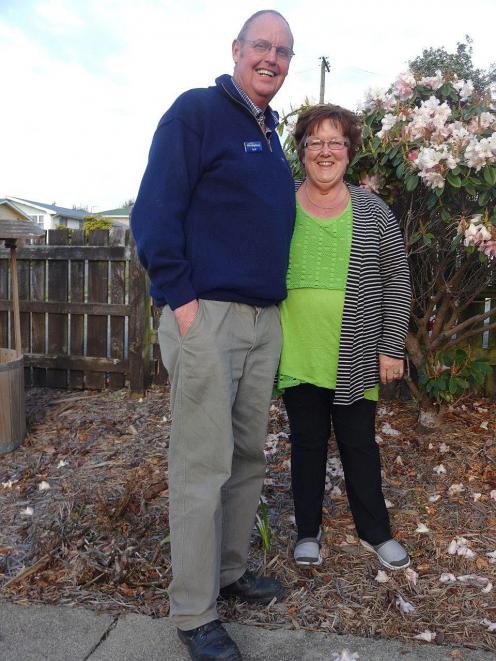 Geoff and Lois Davis, who are retiring and moving from Palmerston after 43 years in the town. Photo: Bill Campbell
The last school bell will ring for Palmerston Primary School secretary Lois Davis tomorrow after 30 years' service.

Mrs Davis and her husband Geoff (both 64), are retiring to Mosgiel after 43 years in Palmerston.

After a three-year stint in the office at East Otago High School, Mrs Davis started as Palmerston Primary secretary in 1987.

Actually the term ''secretary'' was not the right name for her job at the Palmerston school, Mrs Davis said. The terms Mother Hubbard, Tooth Fairy, receptionist, nurse, guardian angel, interpreter, peacemaker, teacher aide, and photographer had also been used.

Things had changed over the years she was involved with the school. She recalled using an Olympia typewriter, carbon paper, a banda machine, a Gestetner duplicator and helping with children's school banking.

Most pupils used to walk to school carrying their own bags.

Principals and teachers lived in the area, usually in school houses, and there were no computers, laptops, iPads, Osmo or interactive whiteboards in those days.

Mrs Davis said she had worked with dozens of staff, hundreds of children as well as her fair share of principals (seven) in her time and thanked her colleagues for their support, friendship and laughter.

Her husband will retire from PGG Wrightson at Palmerston on December 1. He previously ran a stationery store in the town, worked for the Waihemo County Council and had a rural delivery run for 23 years.

Geoff Davis had many community involvements, including serving as Palmerston fire chief for five years.