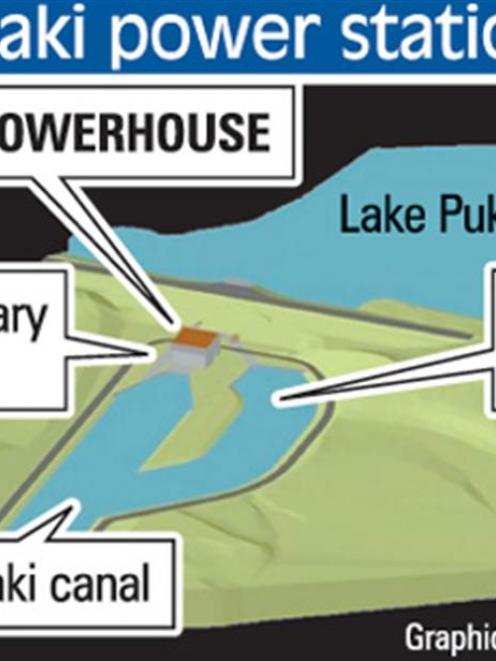 A new power station may be built by Meridian Energy on the Waitaki River hydro-electricity generation system.

Resource consents for the Pukaki scheme have been granted by Environment Canterbury and the Mackenzie District Council.

Meridian plans to use the fall between Lake Pukaki and the Pukaki canal to build a small powerhouse close to the existing canal inlet structure generating 35MW, a third the size of the Waitaki dam power station's 105MW, and 10MW more than Tekapo A.

The Tekapo A and B power stations and the Tekapo canal at the top of the Waitaki system have been sold to Genesis under direction of the Government.

The Pukaki generation will be enough to provide electricity for up to 10,000 average households; more than the 8550 occupied dwellings in the Waitaki district.

Meridian applied for resource consents from the two councils earlier this year. The applications were considered on a limited notification basis and, with three submissions, both councils decided a hearing was not necessary.

The consents include mitigation measures agreed to by Meridian through a consultation process with Central South Island Fish and Game Council, Department of Conservation and Benmore Irrigation Company.

Now consents have been granted, further studies would determine the cost of the project for Meridian to make a decision to build it.

Meridian's general manager of renewable development, Ken Smailes, yesterday said the Pukaki project was "a great example of getting the best out of an existing asset".

"We have long identified the canal intake structure at Lake Pukaki as having the potential to increase generation. It's great to get the consent to develop this project that will maximise the energy we can deliver," he said.

The new power station would be contained entirely within the land around the gate and canal, already owned by Meridian.

"We are yet to make a decision about when we will build this project, but the option will be executed when market conditions are favourable," Mr Smailes said.

The project was originally considered back in the 1970s when the Upper Waitaki power scheme was being built.

When approved, construction would take about two years, requiring between 80 and 150 workers. Materials and construction equipment would be sourced locally, where possible.

Meridian is also proposing the $1 billion north bank tunnel concept power scheme between the Waitaki dam and Stonewall on the lower Waitaki. It already has water-only resource consents for the project and will apply for land-use consents later this year or early next year.