Quilter takes on challenge for fun of it 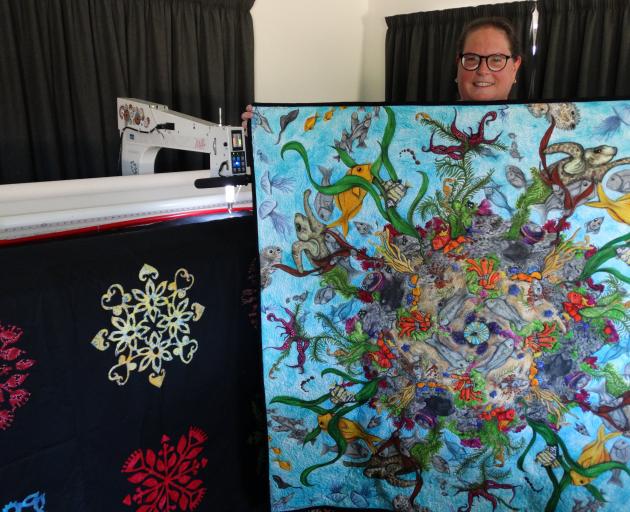 Weston-based quilter Mathea Daunheimer shows an example of a large quilt she has just completed for a client. Photo: Daniel Birchfield
Quilter and textile artist Mathea Daunheimer put her hand up for an international quilting exhibition last year "because it looked like fun".

Mrs Daunheimer, who has a minor degree in fine arts, in addition to her major in East Asian studies, said she is surprised to be the only Otago-based quilter with a work in the exhibition as she knows there are many talented quilters in the south.

The exhibition, entitled "Natural Wonders of the World" will be on display in Dunedin for three days at the end of next week. It is the result of an international challenge to 90 quilters — 30 each from Japan, France and New Zealand — who were asked to interpret one of 30 natural wonders of the world. She did not choose the ice cave at Skaftafell for her exhibition piece — "it was a random assignment" — but Mrs Daunheimer says she loved the colours and described them as "unreal in real life".

She had not been to Skaftafell, but had looked at pictures and films and was fascinated by the way the colours changed with the light.

To obtain the intense colour effect, Mrs Daunheimer decided to quilt the 50cm square challenge piece first before painting it. 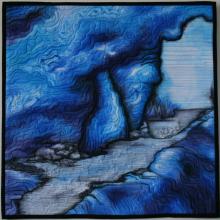 A crystal cave at Skaftafell in Iceland, as seen by Mathea Daunheimer, of Weston, in her quilting piece from the international Natural Wonders of the World exhibition.
"Sometimes I do it the other way round, painting first, then quilting."

But stitching the three layers allowed the paint to drop in different ways, she said. She soaked the fabric with water to help her spread the paint around, before applying another layer of paint, deepening the colour, then adding more detail. Originally from the Boston, America, Mrs Daunheimer and her family had been living in Maine before they came to New Zealand, about seven years ago. While in Maine, she used to pass a fabric store called "Mainely Sewing" and one day went in and bought some small pieces of fabric. At the time she had just bought a sewing machine to do clothing alterations for her son. She then decided to make a quilt for him, teaching herself by looking at magazines and being put in touch with a local quilting group by the women at the fabric store.

After two years, she entered a quilt in a show. She probably started doing competition work because she believed she could learn from the judge’s comments, that they would help her improve her skills. Although Mrs Daunheimer loves small quilting pieces — "I consider my quilting textile art" — she is a full-time quilter with a long arm quilting business at her Weston home. She has a 22kg sewing machine on rollers which makes sewing large pieces much easier.

Many of her works are sold overseas and she still enters quilting shows and competitions on the east coast of the United States where her parents and other family members live.