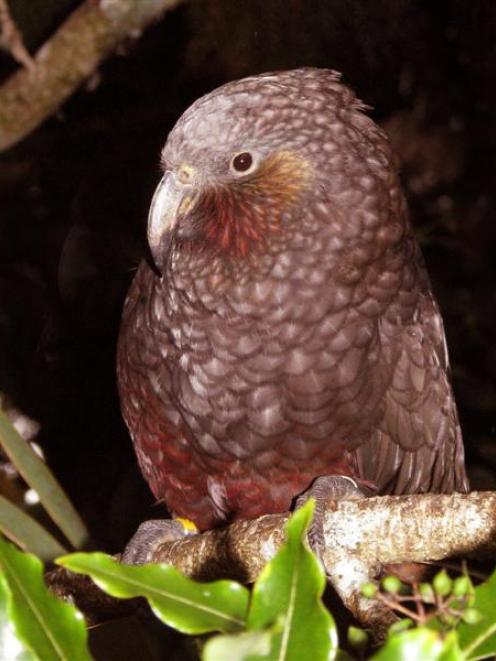 There are fewer than 5000 kaka. Photo supplied.
Two rare birds have been spotted near the Kakanui River mouth, heartening a group working to restore the Kakanui catchment.

One of the birds was a marsh crake, or koitareke, which was seen by Department of Conservation ranger Tom Waterhouse, and the other a kaka, which was spotted by several Kakanui residents.

The Kakanui Community Catchment Project is a group which was established to improve the catchment and its waters, its projects ranging from planting to producing information and encouraging property owners to improve their environment.

Project manager Nicola Holmes said the sightings were a real boost for the group, in particular the sighting of the marsh crake.

''We are working really hard to restore the Kakanui River catchment and to hear that this work might be starting to pay off is really encouraging.''

The group is managed by the New Zealand Landcare Trust and is in its second year.

Its main focus, involving landowners and residents, is on improving knowledge and awareness of ways of improving water quality, reducing soil erosion and increasing biodiversity in the wider Kakanui area.

Mr Waterhouse saw the marsh crake in undergrowth during an early evening walk along the bank of the Kakanui River.

The marsh crake is one of the most secretive New Zealand birds, largely because it inhabits dense wetland vegetation and rarely ventures into the open.

It usually only calls at dusk and through the night.

''I was really lucky to see the bird as sightings are uncommon and the bird is not generally known to live in this area.''

It could also be an indication of cleaner river water.

The wading birds feed in shallows and mud flats on insect and aquatic life.

The birds may have come from around the Orokonui Ecosanctuary, which is near Waitati.