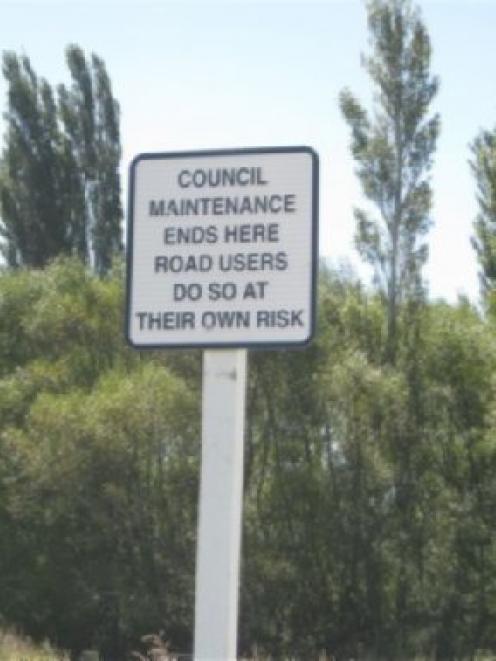 The council has produced a "draft extent of network roading policy" which, among other things, sets criteria on where maintenance will end on roads that in the past may have been maintained.

The proposal is to end maintenance at the boundary of the last private property on remote or dead-end roads, even though they may continue into reserves or other facilities.

Roading assets manager Michael Voss said new signs had been put up in the district on some roads which indicated, based on existing records, where council maintenance ended.

They warn: "Council maintenance ends here. Road users do so at their own risk."

Mr Voss said the signs were based on the existing maintenance programme to assist new roading contractor Southland company SouthRoads Ltd, when it took over road maintenance on July 1 from locally-based Whitestone Contracting Ltd.

Whitestone Contracting had maintained Waitaki roads since 1991 and, on that experience, knew where maintenance ended or had carried out maintenance based on tradition.

The new signs had already prompted responses from the public, which in turn had served to publicise the draft network review and public submissions, which close at 5pm on Friday.

Mr Voss said the signs were not based on the new policy, but on existing records. The locations of signs would be examined, based on feedback from affected parties.

The draft policy out for public comment sets out the way the council maintains its roads, which has implications for people in remote areas or who use remote roads, and reviews one approved in 2008.

The draft policy may mean that some roads, particularly in remote areas, may not be maintained beyond a certain point - the suggestion is the last private property boundary.

Roads or portions of roads, along with their culverts, bridges or other assets the council now maintains, in future may not be maintained.

However, beforebeing implemented, staff would survey all roads and put to the council, for a decision before 2015, a list of those that would be affected and where the cut-off would be.

Affected parties would also be consulted.