Ruling may mean no chapel alteration 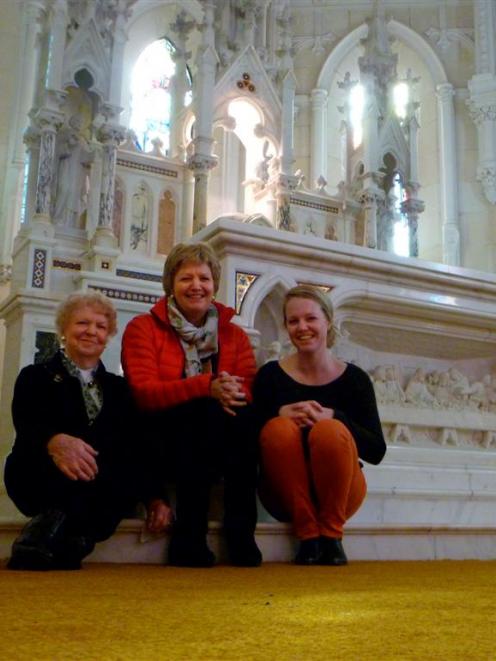 Three generations of a family associated with Teschemakers, (from left) Myrtle McCarthy, her daughter Susie Scott and grand-daughter Megan Scott, yesterday were optimistic a High Court decision will be the end of plans to remove this Italian marble altar from the chapel at the former Teschemakers girls' boarding school. Photo by David Bruce.
''I hope it ends up here,'' is the wish of the woman who led a picket more than two years ago to stop an ornate marble altar being taken from the former Teschemakers Catholic girls' boarding school chapel for use in Holy Name Parish, Dunedin.

Susie Scott, whose family has an association with the school going back to its establishment in 1911, has now had a High Court decision which confirms the altar cannot be removed from the chapel without a resource consent.

''I'm hoping common sense will now prevail and the altar will not be going anywhere,'' she said.

Ms Scott (nee McCarthy) is the grand-daughter of Peter McCarthy, who gave the 28-bedroom house and 10ha which comprise Teschemakers to the Dominican Sisters in 1911, and a further 40ha in 1918.

Yesterday, at the Category B heritage-listed the chapel, she told the Otago Daily Times she was ''very happy'' with the decision for the altar to remain and hoped its removal would not be pursued with a resource consent application.

''This building will be nothing without it. It just cannot leave the building,'' she said.

Ms Scott also questioned how the altar, some of its pieces large and heavy, could be dismantled and transported without damage to it or the chapel.

Fears were held for the future of the chapel and its contents when Teschemakers was put on the market in 2010, but since then new owners John and Joy Murdoch had proved to be ''fantastic and caring caretakers'' who respected the property's past, Ms Scott said.

Yesterday, Waitaki District Council planning manager David Campbell said a resource consent had not yet been filed to remove the altar, but one applying to remove the stained glass windows was still on hold, waiting for the court process to be completed.

Whether an application would be publicly notified would be decided once it was received and after seeking legal advice.

Asked if the opposition and considerable public interest in the removal warranted it being publicly notified, Mr Campbell said that was not the issue.

The issue was what impact it would have on a listed building and who would be affected, which had to be more than minor.

Fr Chamberlain could could not comment yesterday, but his legal counsel Michael Nidd said a resource consent application was being prepared for the Trinity Trust to remove the altar.

He did not know when the application would be filed with the council. Asked if it would be before the end of the year, he was ''not sure''.

The dispute dates from August, 2010 when contractors Naylor Love arrived to remove the altar.

Protesters picketed the chapel until the Environment Court issued a stay.

The Environment Court found in favour of the protesters, ruling the altar was part of the structure of the listed chapel and needed a resource consent to be removed.

That was appealed to the High Court by Fr Chamberlain and first considered in October last year, when the court refused to hear new evidence.

After that decision, the appeal was abandoned, but the court has recently awarded $12,106.50 costs to Ms Scott, a small portion of about $50,000 spent on efforts to retain the altar.

The 270-piece marble altar, from Italy, was given to the chapel in 1926 by the Hart family.

The Dominican Sisters sold Teschemakers in 2000, intending to give the altar and stained glass windows to the Holy Name parish.

That intent was formalised in 2010 by deed of transfer.

• 2000: Property sold to a Japanese businessman, the late Dr Hirotomo Ochi, but specified chattels in chapel, including altar, excluded.

• July 2010: News that altar, stained glass windows and other items to be removed after being given by Dominican Order to Holy Name Parish in Dunedin prompts opposition.

• April 2011: Some items removed, but altar and windows remain.

• October 2011: Environment Court rules altar is a fixture and cannot be removed without resource consent.