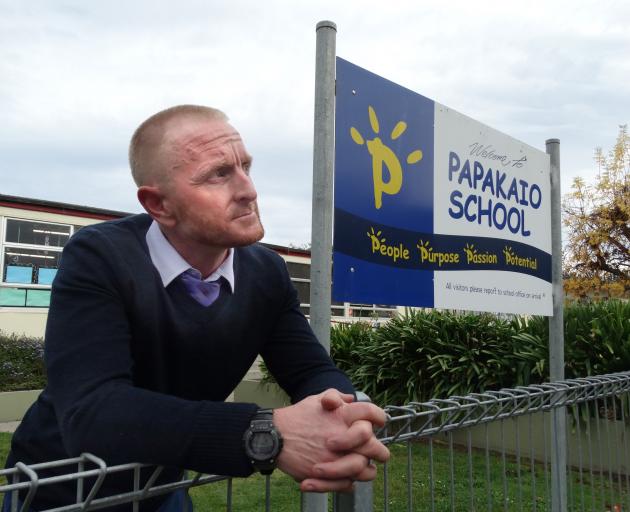 Papakaio School principal Damian Brown. PHOTO: ODT FILES
A rural North Otago school has been left scrambling after one of its school bus runs was suddenly stopped this week, a move understood to be related to the upcoming vaccination mandate deadline.

Sources have told the Otago Daily Times they understand up to four Ritchies Transport drivers have already walked off various jobs in North Otago because of the requirement to be vaccinated, and that other schools in the district could be affected from next week.

Papakaio School principal Damian Brown said parents of 45 of the school’s pupils were having to make alternative arrangements for transport to and from school, after Ritchies informed the school on Monday it could no longer provide one of its two bus services, effective immediately.

The short notice was disappointing and many parents were unable to transport pupils themselves because of work commitments, Mr Brown said.

"These kids are entitled to a bus service and many of them live in some quite out-of-the-way places, so it has been problematic.’’

School staff had been helping pick pupils up and drop them off, but it was "clearly not sustainable for any serious length of time’’, he said.

He had been in contact with the Ministry of Education, but so far there had been no official word of a solution, Mr Brown said.

A notice sent to parents whose children were affected by the Papakaio School bus cancellation said there were 25 schools affected by this issue nationwide.

He could not comment on whether the driver unavailability was related to the vaccine mandate, but bus drivers must have had their first vaccination by November 16 and the ministry was working closely with transport providers to understand the nationwide impact the mandate would have, Mr Meffan said.

At this stage it anticipated only a small number of schools would be affected.

"Where service cancellation cannot be avoided in the immediate term, we will work closely with transport providers to ensure that services resume as soon as possible,” he said.

Mr Brown said he had been fielding phone calls from anxious families wanting a solution and wondering how long that would take to come about.

"I understand that all employers are doing their best to sort out a situation that is unprecedented, trying to maintain confidentiality, work to support staff and at the same time support the Government’s efforts to keep New Zealand people as a whole safe, but we seem to have been caught in the crossfire here and it’s the schools that are bearing the brunt of it.’’

There are four weeks left of the primary school year. As of next year, Ritchies will no longer provide the school bus service to Papakaio School, as Pearsons Coachlines Oamaru was awarded the Ministry of Education contract for most Waitaki schools from term 1 next year.

Ritchies was approached for comment, but did not respond to requests before deadline.