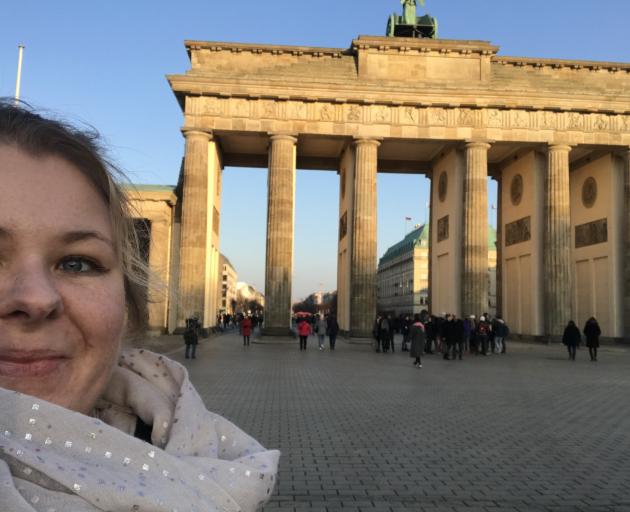 Mel Sloan's friends are raising funds to help bring her home from the UK, after Covid-19 and the need for urgent spinal surgery left her stuck. Photo: Supplied

An Oamaru woman is stranded and isolated in a United Kingdom hospital, and is facing paralysis unless she has immediate spinal surgery.

Two weeks ago, Mel Sloan woke up completely numb and suffering spasm cramps and was taken to hospital by ambulance.

"[Due to] failing systems and strength, my upper neck vertebrae have been fusing for years, but are now pushing the discs out, which are compressing the nerves and spinal cord. Without surgery, I’ll lose use of my legs from the tummy down. With surgery – it could stop the progression or …. I hate to think," she said.

A Givealittle page has been created to help bring Miss Sloan home to New Zealand, where she can get more of the medical attention she desperately needs and be with her family.

Miss Sloan was diagnosed with rheumatoid arthritis at the age of 2, and by 21 she required both hips and knees to be totally replaced before beginning her teaching career.

She taught for eight years at St Joseph’s School and in 2011 won the ACC Attitude Supreme Award in recognition of being an unsung hero who lives life with positivity while facing extreme adversity.

Miss Sloan decided to travel in 2012 while she was still healthy enough to do so alone, and ended up teaching in Coventry, England, where she was quickly offered a permanent job, she said from her hospital bed in Birmingham, where she is not allowed visitors due to Covid-19.

"It’s been eight years now. The last two years has seen my health deteriorate and many symptoms have caused great stress, leading to anxiety and depression."

The past six months had been particularly tough for Miss Sloan. Her health was failing, and she was struggling with numbness in her legs and spasming.

She relied on opioid medication, special diets and "miracle mixtures" just to relax and watch television in the evenings. But nothing worked.

"I battled on, teaching the kids I love so dearly here. Teaching here has opened my eyes to many cultures, religions and new understandings."

But in March she eventually had to make the difficult decision to stop doing the job she desperately loved and has been self-isolating since March 16. Miss Sloan’s work visa, which she had been renewing every two years, was due to expire in September and, with visa rules changing due to Brexit, and things being further complicated due to Covid-19, she had made the decision not to renew it. It was time to go home to "recoup and heal a bit" and spend time with family.

Then she was rushed to hospital.

She said she felt helpless being so far away, and this was one way she could help the friend who always helped others.

"She’s so alone – and she’s such a people person," Mrs Ross said.

"What she does for her kids in New Zealand and over there. So many people think she’s so special.

"She’s just one of those people.. such a fighter and so positive."

Initially, she was fundraising to help bring Miss Sloan and her two cats Murphy and Maisy home as soon as possible.

With her illness, she was already at "very high risk" if she contracted Covid and, now that spinal surgery was imminent within the week, Miss Sloan would need a support person to fly with her after the surgery.

Mrs Ross said she had a long tearful conversation with Miss Sloan’s mother, Barbara, on Sunday.

"She feels so helpless. Even if she could go to the UK, with ovid, she couldn’t see her in hospital.

"They just love her so much."

The response to the Givealittle page has been "pretty amazing", and she hoped the messages from friends donating were keeping Miss Sloan’s spirits up in her hospital bed. As of Wednesday, the page had raised $3400.

To donate, go to: https://givealittle.co.nz/cause/lets-get-mel-home-to-nz