Sweet taste of success for restaurant 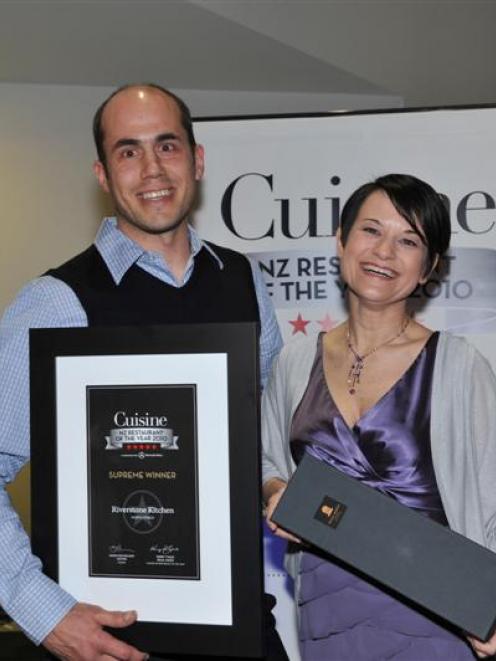 Yesterday, in Auckland, they were still on a high with a flurry of media interviews after being presented with the supreme accolade in Cuisine magazine's New Zealand Restaurant of the Year Awards.

The restaurant is beside State Highway 1 just south of the Waitaki River bridge.

Beating 49 other finalists, in what was described as one of the toughest competitions in the six-year history of the award and more revisits during the judging than ever before, was "mind blowing", Mrs Smith told the Otago Daily Times yesterday.

They see the award as a big boost for their restaurant - and for Oamaru - and are still coming to terms with the implications.

Mrs Smith said they had no inkling they were going to win the supreme award.

Their restaurant was announced winner of the best casual dining regional award - then the supreme winner.

The Smiths said the award would have major spin-offs for their restaurant, but was also "brilliant for Oamaru".

Mrs Smith said many things worked in their favour, particularly the way the awards were designed this year focusing on a range of things, not just food.

While well known in the region, Riverstone's location among dairy farms on the Waitaki Plains makes it somewhat remote, unless diners turn up the driveway off State Highway 1 to it and its gift shop complex.

While they have "many plans" to continue to develop the business, including another book following on from Riverstone Kitchen Notes, in terms of the food they serve they plan to continue as they have in the past.

The judges praised their food as: "A wonderful showcase for what makes New Zealand cuisine special."

"We are not going to change much. If you come expecting fine dining and silver service, you're going to be disappointed. We are casual with simple food and friendly service - that's what the judges experienced," Mrs Smith said.