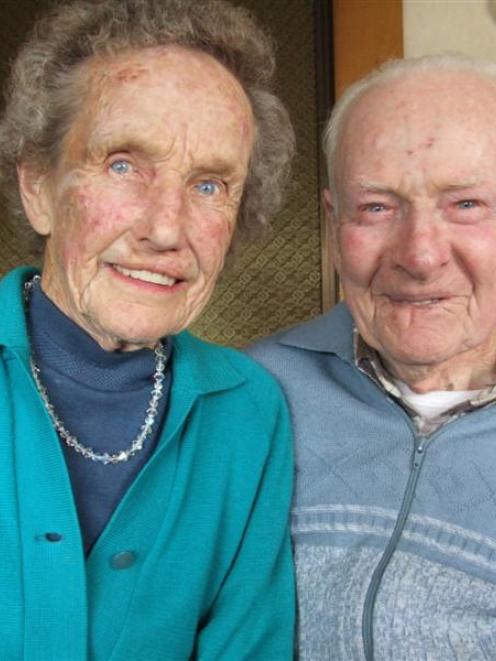 Iris and Kevin Howard celebrate their 60th wedding anniversary today. Photo by Sally Rae.
Ask Kevin and Iris Howard the secret of a long and happy marriage and you will get a somewhat surprising answer - having two televisions.

The Oamaru couple, who celebrate their 60th wedding anniversary today, were kept busy in the early years of their marriage raising six children, including twin sons.

After their children - John, Peter, twins Barry and Michael, Maureen and Bernadette - left home, they thought they would finally have a chance to watch television.

There lay the problem.

"To save our marriage, we bought two TVs, and we've never been happier. It did save a lot of worry," Mrs Howard (nee Dorward) laughed.

The couple, who met at a dance in the Scottish Hall, were married in St Patrick's Basilica.

They settled in Oamaru, before moving to Windsor, where they lived from 1954 until 1976.

The couple, who have seven grandchildren, share a love of gardening, maintaining a quarter-acre section.

Mr Howard said marriage was a contract, "not a one way road", while his wife said it was important to "think together and do things together."

The couple will celebrate with lunch at the Star and Garter on Saturday and hope friends will then join them for afternoon tea at son Barry's home.