The water is on: now for the hard bit 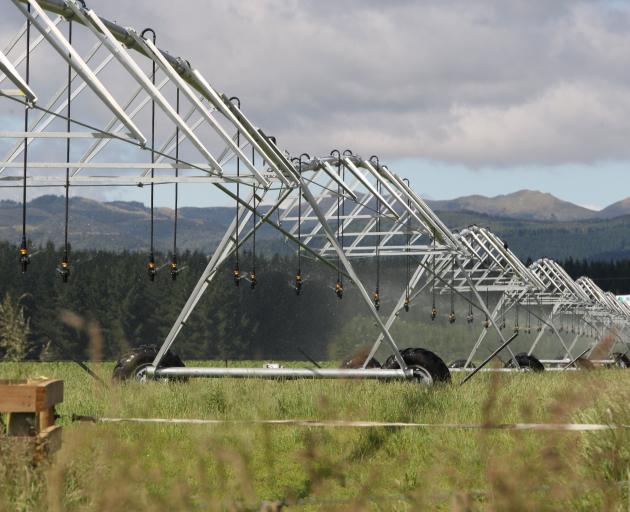 It could be a couple of years before North Otago's newest irrigators get to grips with their new resource, but with a big dry spell predicted this summer, farmers are pleased to have a guaranteed water supply.

While the water on the North Otago Irrigation Company's expansion began flowing in September, it was the end of November when all 85 off-takes of the expansion were commissioned, reaching the end of the line at All Day Bay. 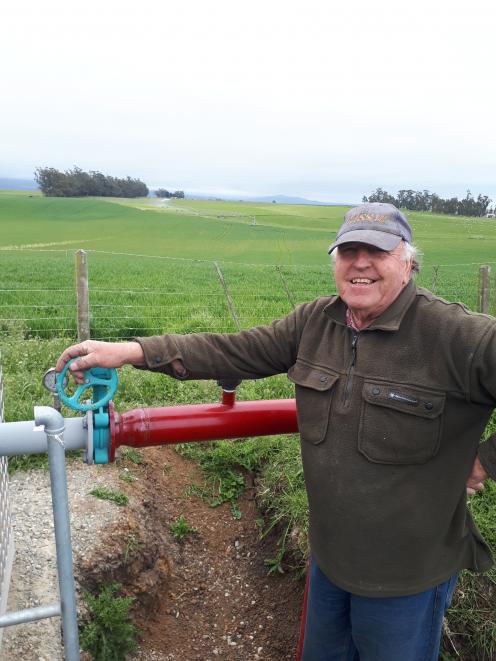 Bruce Dalgety turns on the water on the family’s Kakanui farm. Photo: Supplied
Wayne Brenssell, of All Day Bay, was one of the last to get water in the 114km expansion of the irrigation company's scheme that draws water from the Waitaki River.

He has been irrigating for the past three weeks.

And while some might believe that irrigated farms were sorted once the water was turned on, he said he was ''absolutely'' in the learning curve stage.

''It's a bit more than that,'' he said. ''You're probably going to be two or three years really getting it sorted.''

He was still figuring out where best to place his four centre pivots, where to place crops to ensure the best growth, where to put gates into existing fencing.

But he was happy to be irrigating 128ha with his 90 shares from the company, running sheep and beef, growing 50ha of cereals and carrying out some dairy support and lamb trading on his property.

''It's not changing our whole operation but certainly you have to up the ante, keeping up with the cost of everything,'' he said.

Mr Brenssell's father-in-law, Bruce Dalgety, said it was a ''fantastic'' feeling turning water on at the property, which he grew up on before his son-in-law and daughter took over.

''We've had some terrible dry spells; the '80s were devastating,'' he said. ''It's typical North Otago. We get our dry spells from time to time and when it's dry it's usually really dry and it can be devastating.''

While some might talk about the price of lamb fluctuating, it was dry weather that had made life difficult. And he had tried to source water for the farm over the last 25 years.

North Otago Irrigation Company chief executive Robyn Wells said farmers would be dealing with ''a few issues'' with on-farm infrastructure that would need to be ironed out.

''It's like any bit of technology or equipment: you've got to get used to learning to drive - and that takes a couple of years.

''Us getting the water to their gate is one thing, but then they've got to set up their on-farm infrastructure and then have it set up so that it operates well, and efficiently, for them,'' she said. ''And that is something that it takes a little time to master. It's not the sort of thing that the average person can come off the street and do.

''It's about learning how to schedule and manage that irrigation supply - and that just takes experience.''

Hayden Williams said he and his wife, Robyn, had ''jumped off into the deep end''.

While sharemilking on the Waitaki Plains, the couple bought a Five Forks farm four years ago and had spent a lot of time readying it for the arrival of irrigated farming.

He too was going through a period of ''growing confidence''.

''It's all about energy transfer from the pasture species to the animal,'' Mr Williams said.

On his 260ha farm, 140ha was covered by three centre pivots operating on the farm's north-facing slopes.

He had bought 180 shares and had used a drone to map the contours of the land - 3-D mapping showed where to put ramps and culverts in, for example.

''Designing your own farm is fantastic,'' he said.

Planning the farm from the outset had eliminated some risk, he said.

And right from the outset, to make sure they were ''not going to misuse the land'', the couple had put together a nutrient budget and determined how much stock the farm could handle.

But still in the farm's business plan, there was accounting for risk. While Mr Williams said he hoped to grow 18 tonnes of grass per hectare, he had budgeted for 16 tonnes.

And he remained ''confidentially apprehensive'' as he continued a process of trial and error and worked out the ''newbie stuff''.

The $57million expansion to the irrigation company's scheme grew the company by 8000 shares and its command area by roughly 10,000ha.

This summer, when the National Institute of Water and Atmospheric Research has predicted a hotter and drier summer than usual for inland and coastal Otago as the La Nina weather pattern remains influential, 25,000ha of North Otago, nearly 200 shareholders south of the Waitaki River, will receive shares providing 0.4 litres per second per hectare, which is equivalent to 25mm per week.

Bob Allan's 146ha Weston farm was the first property to receive water in the expansion and sits at the edge of the irrigation company's first stage, completed in 2006.

Back then, he tried to buy in, but the scheme stopped just short and his cheque was returned.

And although he no longer farmed the land, he owned it and he owned the infrastructure through which the water flowed.

And although there was ''a lot more positive attitude to North Otago'' farming, because irrigation was new there was still a lot of looking over the fence to a neighbour's property and asking whether the move to irrigation had been worthwhile.

''All those hundreds of thousands I spent ... were they worthwhile?''

The answer for another multi-generational farmer, Kia Ora sheep and beef farmer Ian McNaughton, was simple.

There would not only be guaranteed grass growth from his 80 shares for his 170ha property, there would also be ''more work'' as the lambs raised on his son's nearby dryland hill block were brought to his spot for finishing.

The expansion was originally expected to deliver water to farms by September 1 last year and when the water was first delivered to farms this year the irrigation company's chairman, Leigh Hamilton, said farmers who had been expecting water from the expansion were stressed with their promised water a year late.

He would not comment in detail on what caused the construction delay, other than to say if he gave a simple answer it would be inaccurate.

But he said there would be mediation with the company's contractor, McConnell Dowell, once the scheme was entirely handed over to farmers, because revenue had been lost revenue through the delay and there could be other costs to recover.