All going swimmingly for fishing season 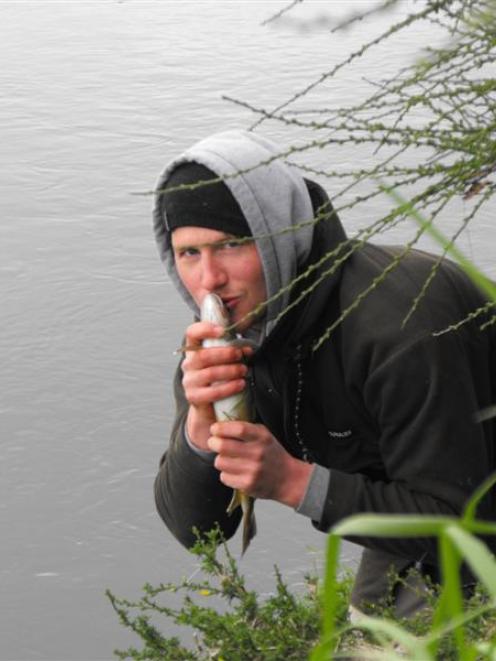 On opening day, fisherman Kieran Caldwell says goodbye to a catch too small to keep. Fish and Game reported no non-compliances during the day in Central Otago. Photo by Olivia Caldwell.
The 2012-13 fishing season has started strongly in Central Otago, with sales of fishing licences at a high level just one week in.

Fish and Game Cromwell officer Cliff Halford said sales had been great this week and the number of anglers taking to the waters had been impressive.

Fish and Game rangers interviewed 42 anglers on opening day in Poolburn on Monday and said there had been a 100% compliance with fishing licence rules.

"They were all licensed and that is what we would expect on opening day."

This season there would be an active number of Fish and Game rangers in Central Otago.

Mr Halford said anglers were expected to carry their licences at all times.

The Christmas period between December and January would be particularly busy, he said.

Fines for those who did not hold a licence would vary and unlicensed anglers could find their fishing gear forfeit.

"In the first instance you would be very silly not to carry them."

Mr Halford said the season had started positively and he hoped it would continue that way.

The Queenstown and Wanaka seasons would not get fully under way until November 1, when the major lake tributaries open, but there had been a reasonable number of licences sold in the area.

Outside Sports in Queenstown had sold 35 licences in the first three days of the season.

Mr Halford said good options for local anglers would be Moke Lake and Lake Johnson, where more than 500 rainbow trout had been liberated by Fish and Game from its Macraes Flat hatchery.

On Wednesday, 500 yearling rainbow trout were released into Lake Johnson and although these would not be big enough for this year's season, last year's were "certainly catchable".

Lake Hayes was home to brown trout, he said, and he advised fishing near Lake Wakatipu's shallow water margins was a great option.

The Southern Lakes region is populated with the brown trout, rainbow trout and landlocked chinook salmon.

Lake outlet fisheries on the Kawarau River at Frankton and the Upper Clutha are productive, and the the Hawea River is worth a visit, but anglers should be alert for fluctuating river flows.

The Upper Clutha offers challenging angling on a major river.

The Glenorchy fishing competition will take place this Saturday, near the township at the head of Lake Wakatipu.