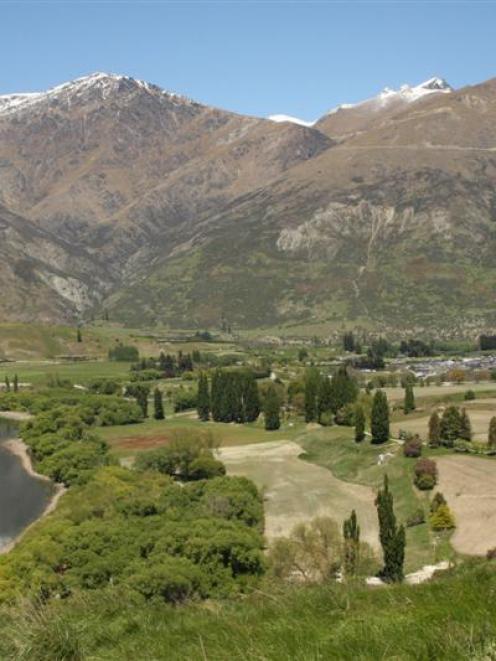 The Threepwood development extends across the flat area beyond the southern shore of Lake Hayes.
A long-standing dispute between the developer of a subdivision at Lake Hayes and a neighbour - which has cost both parties hundreds of thousands of dollars in appeals - appears to be over.

An Environment Court decision from Judge Jon Jackson, dated March 25, said the court had withdrawn the appeal from Fred van Brandenburg against Meadow 3 Ltd (Threepwood), there was no order for costs and the file should be closed.

When contacted by the Otago Daily Times, Meadow 3 Ltd director Jim Boult confirmed the appeals had been withdrawn and the development was now able to proceed.

Mr Boult said he was unable to provide any further comment, other than to say he was "happy" the issues had been resolved and was "now looking forward to completing the job".

Before sales were stalled in 2007 as a result of court action by Mr van Brandenburg, roughly half the sites had been sold.

In 2007, the court found Meadow 3 Ltd had felled and limbed trees on the site in contravention of its land-use consent.

However, the court allowed Meadow 3 to apply to vary the land-use and subdivision consents to remedy its non-compliance.

One variation was to allow certain landscaping to be carried out to mitigate the effects of the felled and limbed trees; the other was for boundary adjustments to vary the subdivision consent and to have mounts constructed east of the limbed trees.

Last year, Meadow 3 was granted the landscape variation, but in November Mr van Brandenburg filed a notice of opposition appealing that decision.

In his written submission, Mr van Brandenburg told the Environment Court the matter had "gone on long enough", but he had taken a "personal interest" in it because he believed he was "in a good position to deal with these matters".

However, he had "certainly not" done it for his own gratification.

"It has cost me many hundreds of thousands of dollars in fees, costs and time in lost income ... not to mention other significant damages in lost friendships from other quarters."

He said he had acted for the "silent majority . . . ignorant to the consequences of what is to follow now that the trees have been removed".

"Nor would they know how to go about taking the action that I have on their behalf to protect this view as one of the most photographed views in New Zealand."

The ODT understands matters between the parties are finished.